Alabamians will have to wear masks in public for at least another month.

Individuals will be required to wear a mask or other facial covering when in public and in close contact with other people, as described in the order. This amended order extends until 5 p.m. Aug. 31.

While the majority of the safer-at-home order will stay the same, Ivey said one change will affect schools.

"(Students) will now be required to wear masks whenever practical from second grade through college," Ivey said. "We know with all responsibilities of being a teacher this can be an added burden, but just as we are focused on creating a safe and healthy environment for our students, it's also important we take care of our teachers as well."

Ivey said as governor, she has a lot of things to factor into the equation of making decisions but the goal has always been to make more good decisions than bad, hopefully leading to more positive results along the way.

"Tough decisions are a lot easier to make when you're on the sidelines than when you're actually in the arena," Ivey said. 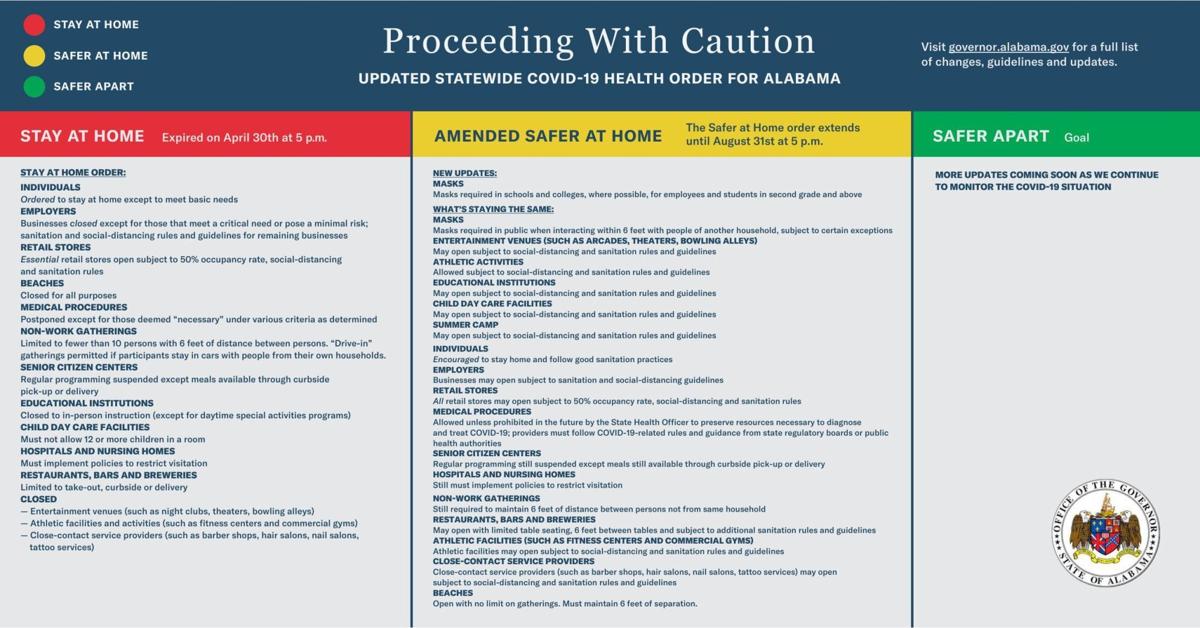 "While no one enjoys wearing a mask, I'll be the first to tell you ... I believe we are making progress in this arena," Ivey said. "Y'all, we just must remain vigilant if we are going to get our kids back in school and keep our economy open."

Ivey reminded citizens wearing a mask protects others and "can't hurt," so citizens should abide by the law and continue to take precautions.

Harris said the curve has not quite flattened and hospital and case numbers, which continue to grow daily, are very similar to after Memorial Day.

"Our numbers are not yet particularly encouraging," Harris said.

Harris said the state is still seeing fallout from the July 4 holiday.

Harris said it's crucial for people to be willing to wear masks and face coverings.

"We really need people to continue to cooperate with wearing face coverings, it's more important than ever," Harris said. "We still have several months — at least — left of this."

Harris said Alabamians all need to work together and cooperate and pull together in order "to get on the other side of this."

But Harris explained this is for the greater good and it's important to abide by this law.

Harris said although there were some "mixed messages" about mask usage early on, doctors, studies and health professionals all show there is no doubt this is the most effective thing to do in order to prevent spreading disease.

"Today there's no argument on whether or not these are effective," Harris said. "This is the best tool we have right now to prevent disease short of everyone being locked in their house which we don't intend to see."

Ivey said she does not intend to shut down more businesses as it is not an option for Alabama's economy.

A reporter asked Harris what was giving him the indication the mask mandate has been effective thus far and Harris said it is hard to correlate that sort of thing at this time, but it's clear masks work and must be worn to reduce transmission.

"I think clearly what we're trying to do is reduce transmission of disease and that's what we mostly want to see," Harris said.