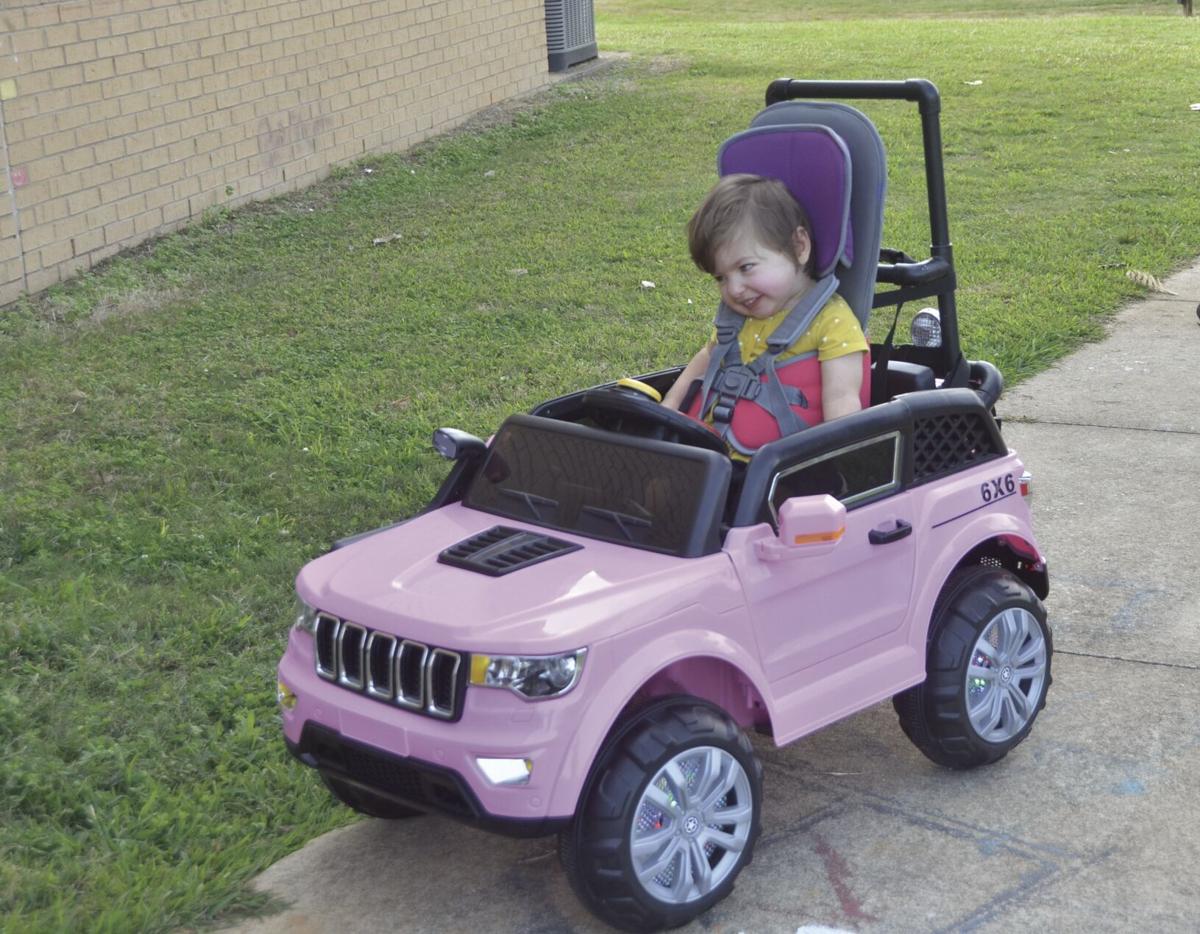 Stella Kirkpatrick rides in her car. The Herald / Briana Wilson 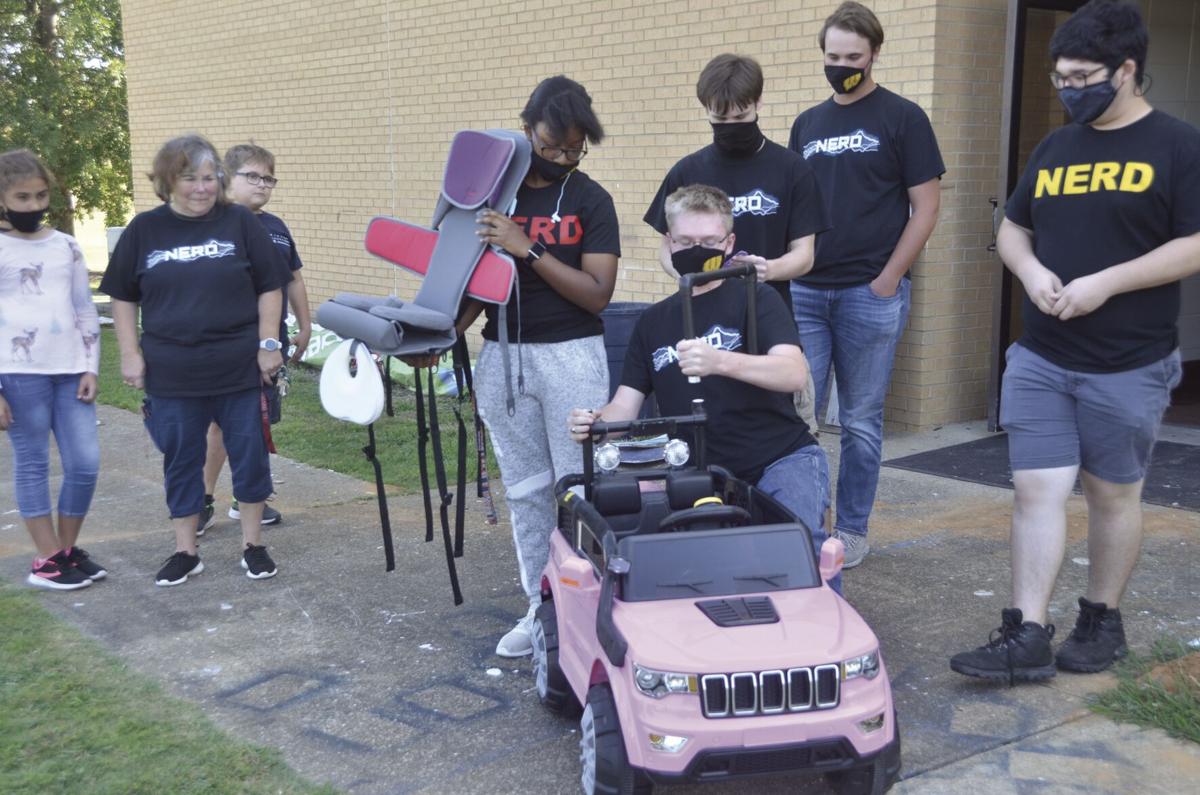 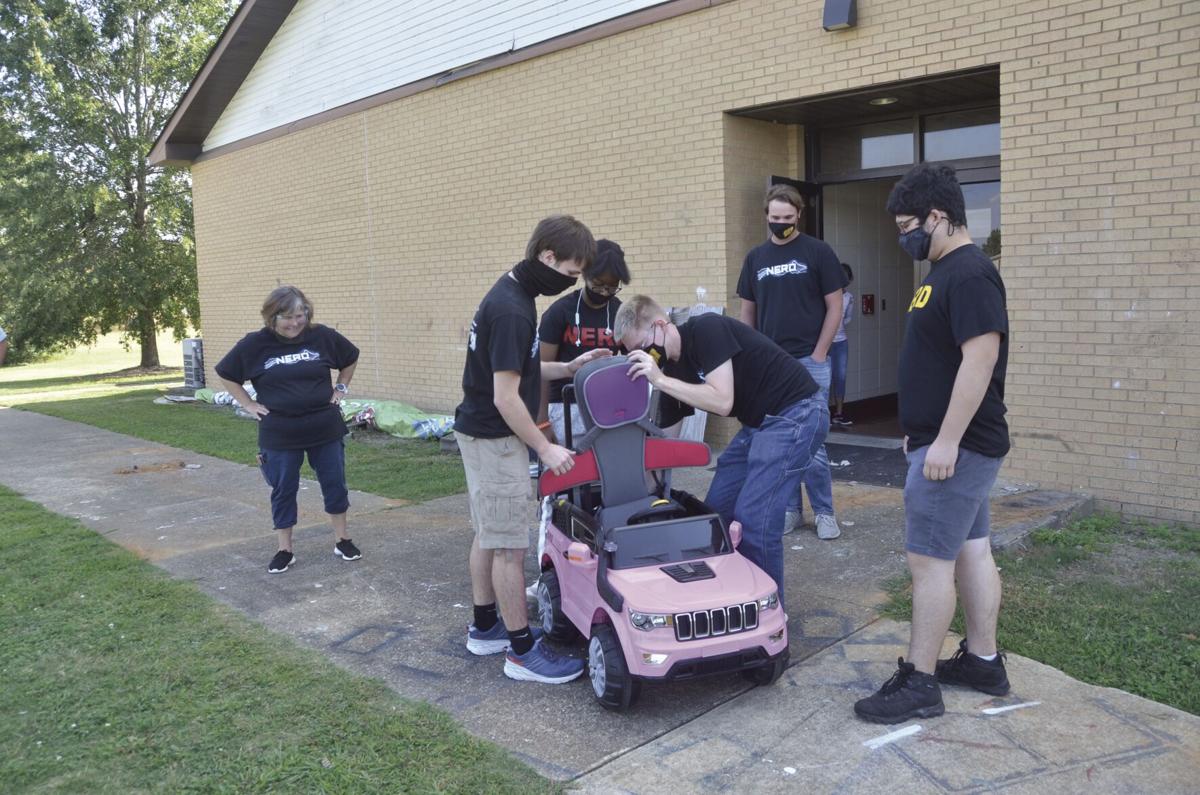 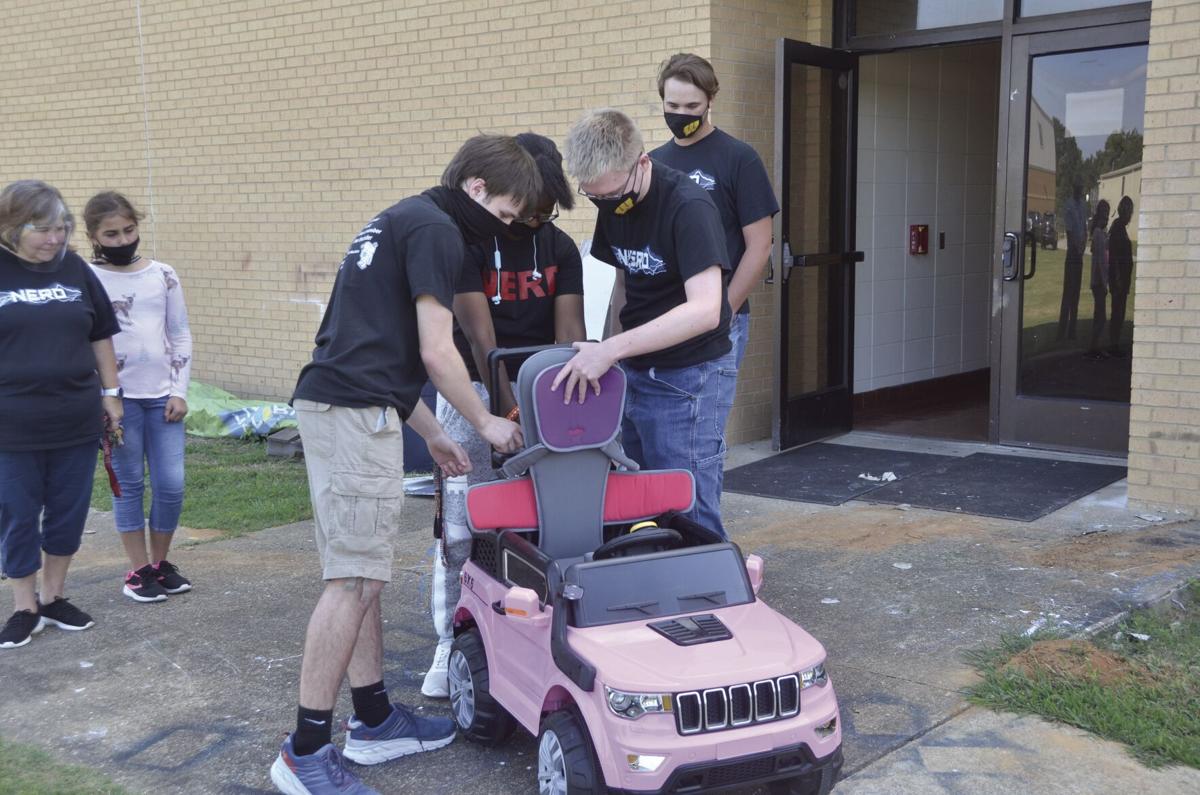 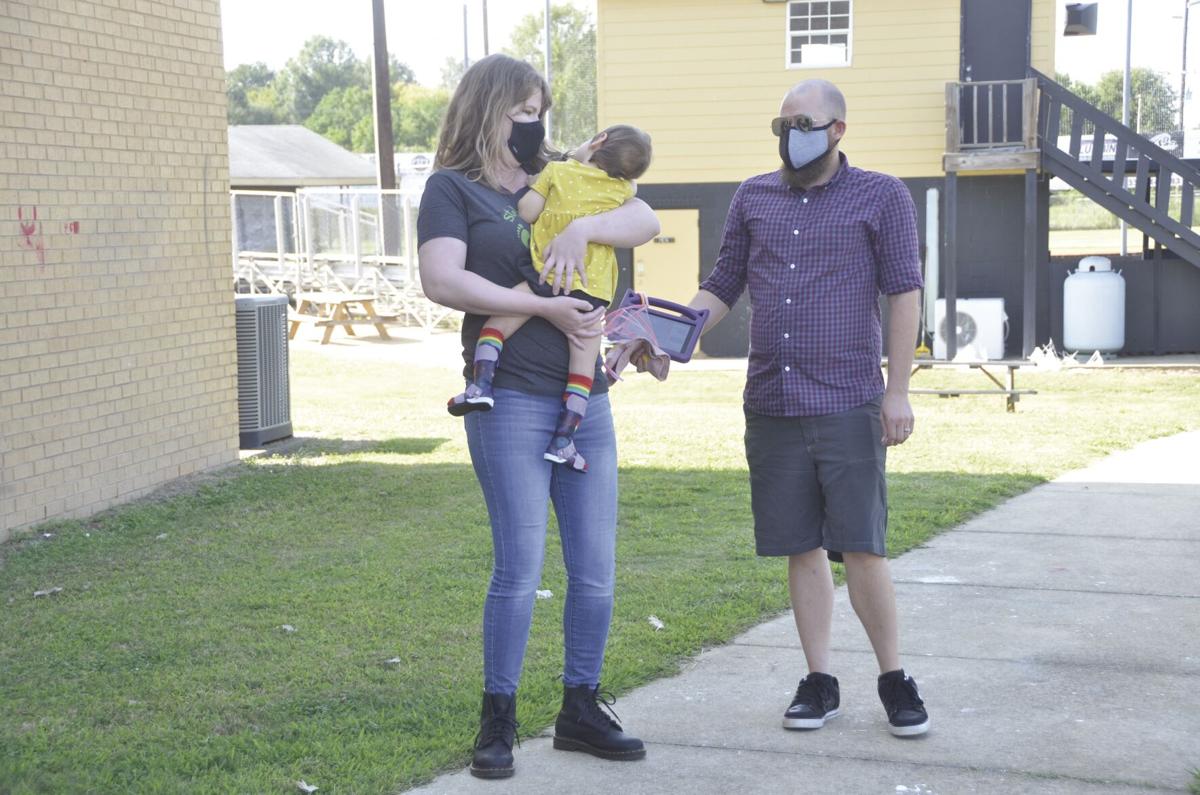 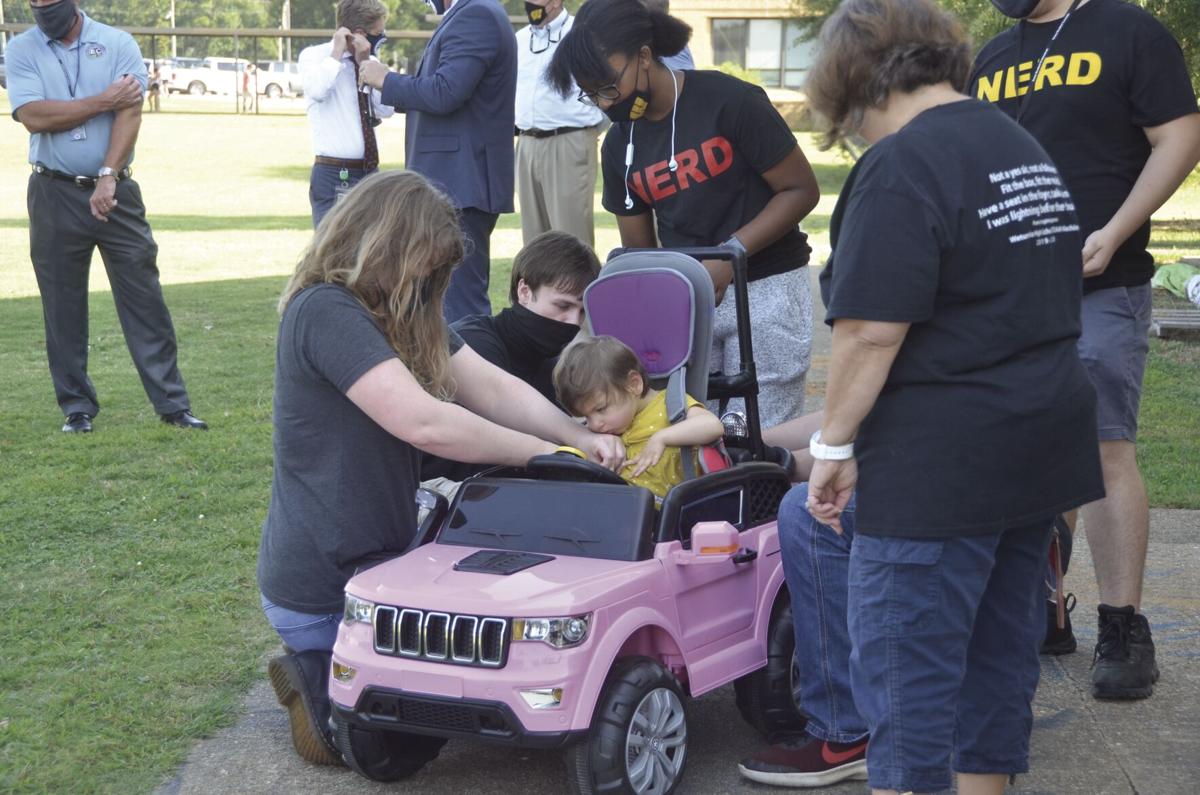 Stella Kirkpatrick gets strapped into her car. The Herald / Briana Wilson

Stella Kirkpatrick rides in her car. The Herald / Briana Wilson

Stella Kirkpatrick gets strapped into her car. The Herald / Briana Wilson

Stella Kirkpatrick was the center of attention on Monday as robotics students at Wetumpka High School presented her and her family with a modified motorized toy car.

Five WHS students worked for several months to provide the Kirkpatrick family with a car that 2-year-old Stella, who has limited mobility, could learn to use all on her own.

Having a car modified to Stella’s abilities will not only be fun for the toddler, but it will be therapeutic by helping to improve her fine motor skills and furthering her understanding of cause and effect, said Stella’s mother, Sarah Kirkpatrick. For example, pushing the car’s acceleration button will cause the car to move forward.

For guidance, the students consulted with Go Baby Go, a nonprofit organization that modifies toy cars for children with mobility disabilities, and spent weeks researching the best way to approach the project.

Stella and Kirkpatrick met with the robotics students and their teacher Dr. Virginia Vilardi earlier this month to get measurements of Stella in her car. The data was used to make modifications to seat, which needed more stabilization.

“It will be a good first step toward her learning how to operate a motorized wheelchair,” Kirkpatrick said.

Kirkpatrick said it’s amazing whenever she can get access to toys that are adapted for Stella.

“Sometimes we can feel very isolated because things in this world aren’t made for her,” Kirkpatrick said. “We’re excited because there aren’t a lot of toy options out there for her.”

Stella’s mobility is limited because of difficultly controlling her arms and legs, and the core of her body is unable to perform its typical function. Kirkpatrick said it’s hard to find toys that suit her daughter.

Stella’s disabilities were caused by injuries during birth. She was born four weeks early due to a placental abruption. This occurs when the placenta detaches from the inner wall of the womb before delivery, depriving the baby of oxygen and nutrients.

She was without oxygen and a heartbeat for about 17 minutes, and suffered a brain injury known as hypoxic-ischemic encephalopathy (HIE).

“The doctors were pretty sure she wouldn’t make it,” Kirkpatrick said. “The fact that she’s here is a miracle.”

She was later diagnosed with Spastic Quadriplegia Cerebral Palsy, which Kirkpatrick said was caused by her brain injury. Stella is also epileptic.

“We’re so appreciative of what these students have done,” Kirkpatrick said. “They blew it out of the water. They really thought of it all.”

In the future, as Stella’s skills develop and she becomes more independent, the car can be further modified to grow with her, Vilardi said.

Wetumpka principal Dr. Robbie Slater said when he found out about the opportunity to help the Kirkpatricks, he thought it would be a great opportunity for the students to apply the hands-on skills they’ve learned in the classroom to a real-life situation to help a child.

“This is one of the best life experiences they could ever have,” he said. “When this is done, it could open the door to helping more people in the community.”

Vilardi said what touches her the most is seeing her students making a difference in someone’s life.

“The goal is to help them grow into adults who will make a difference in the future, but they’re bringing the future to the present,” Vilardi said. “If you teach community service to them while they’re young, it just becomes a part of who they are. What’s also great about this is that the students aren’t doing it because it was assigned to them. We have 67 students on the robotics team and these kids stepped forward and said they wanted to help.”

The students who worked on the project are: Avery Pyles, Michael Fulmer, Alan Estrada, Serena Ward and Bailey Worrell. Vilardi said the team already has another project lined up. Another local family with a child who has disabilities has reached out for help and the students have agreed to take on the project.