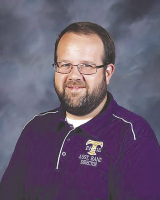 Michael Bird is a music teacher for Tallassee City Schools and a regular columnist for TPI.

It was the last week of January, 2009.  Barack Obama was inaugurated as the 44th President of the United States.  Pilot Chesney “Sully” Sullenberger landed a U.S. Airways flight on an icy Hudson River, saving his passengers and becoming a hero in the process. In California, a woman gave birth to eight children and became known as the “Octomom.”

Tallassee High School had distinguished itself in the music world for a long time.  Between the accomplishments of the Long Blue Line and, later, the Pride of Tallassee, the band program was noted around the region for its superior-rated performances and increasing participation during an era when many school bands were downsizing.

Similarly, the choral side of the program had really taken off during the decade of the 2000s, as more and more students began participating in the award-winning, nationally recognized show choirs at THS: New Image, Gold Edition, Voltage, and Divas.

By the 2008-09 school year, choral director Jerry Cunningham had planned to begin his own competition.  After decades of attending contests hosted by other schools, Mr. C planned this one with a twist: instead of hosting the competition at our school, we would rent the nicest auditorium in the tri-county area instead.

And the choral directors all over Alabama, Tennessee, Mississippi, and Georgia began flocking to this event, which has become one of the greatest successes in our department.

As we host the 15th annual Capital City Classic January 27-28, we invite you to come and enjoy the music of choral groups from Pike Road, Chelsea, Eufaula, Pell City, Oxford, Auburn, Albertville, Opelika, Enterprise, Prattville, Spain Park, Homewood, Hoover, Helena, Vestavia Hills, and many more from within our state.  We also have groups from Tennessee, Mississippi, and Georgia performing in the competition.  Finally, we are very grateful to the sponsors who have helped make this festival possible.