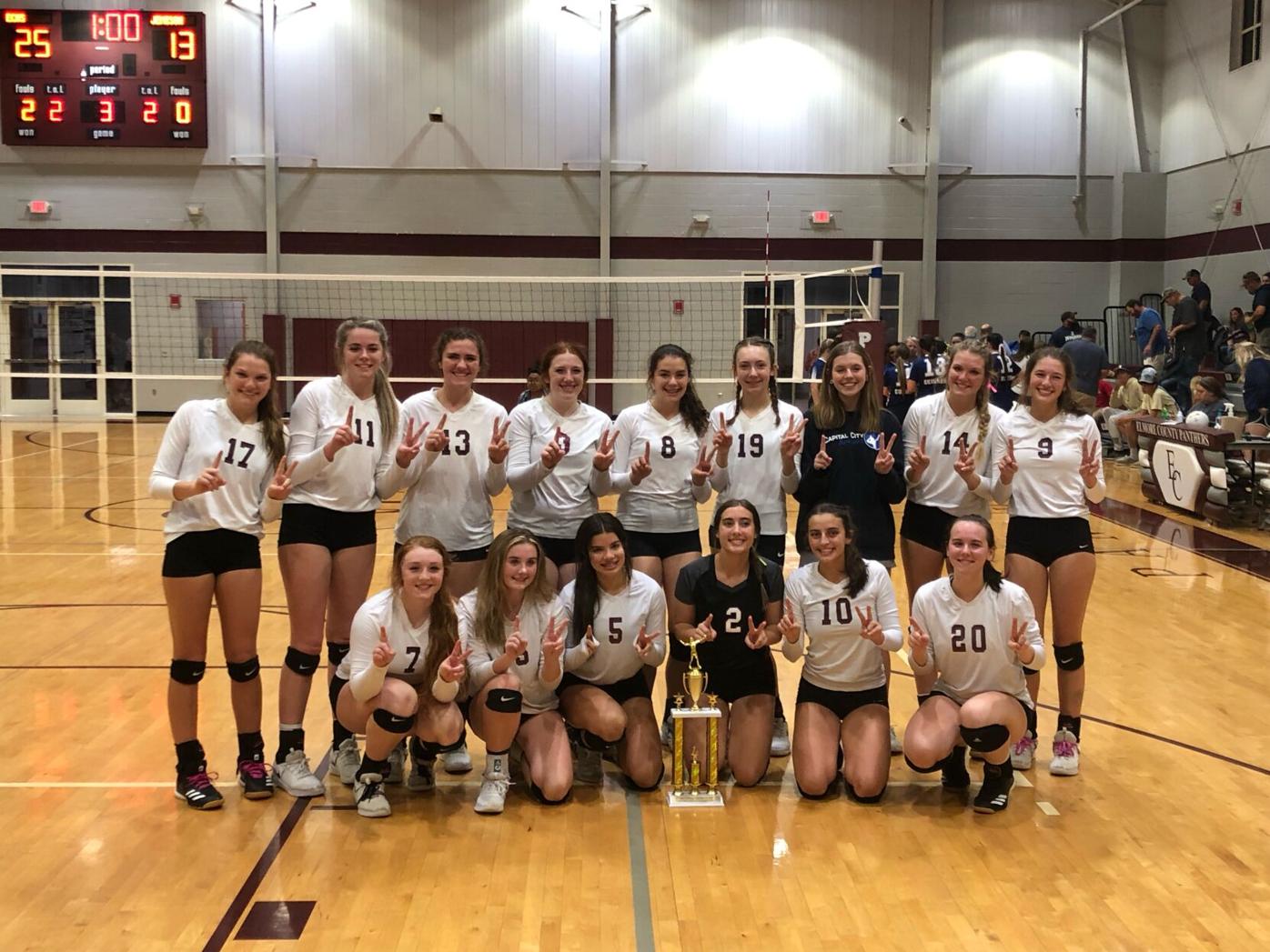 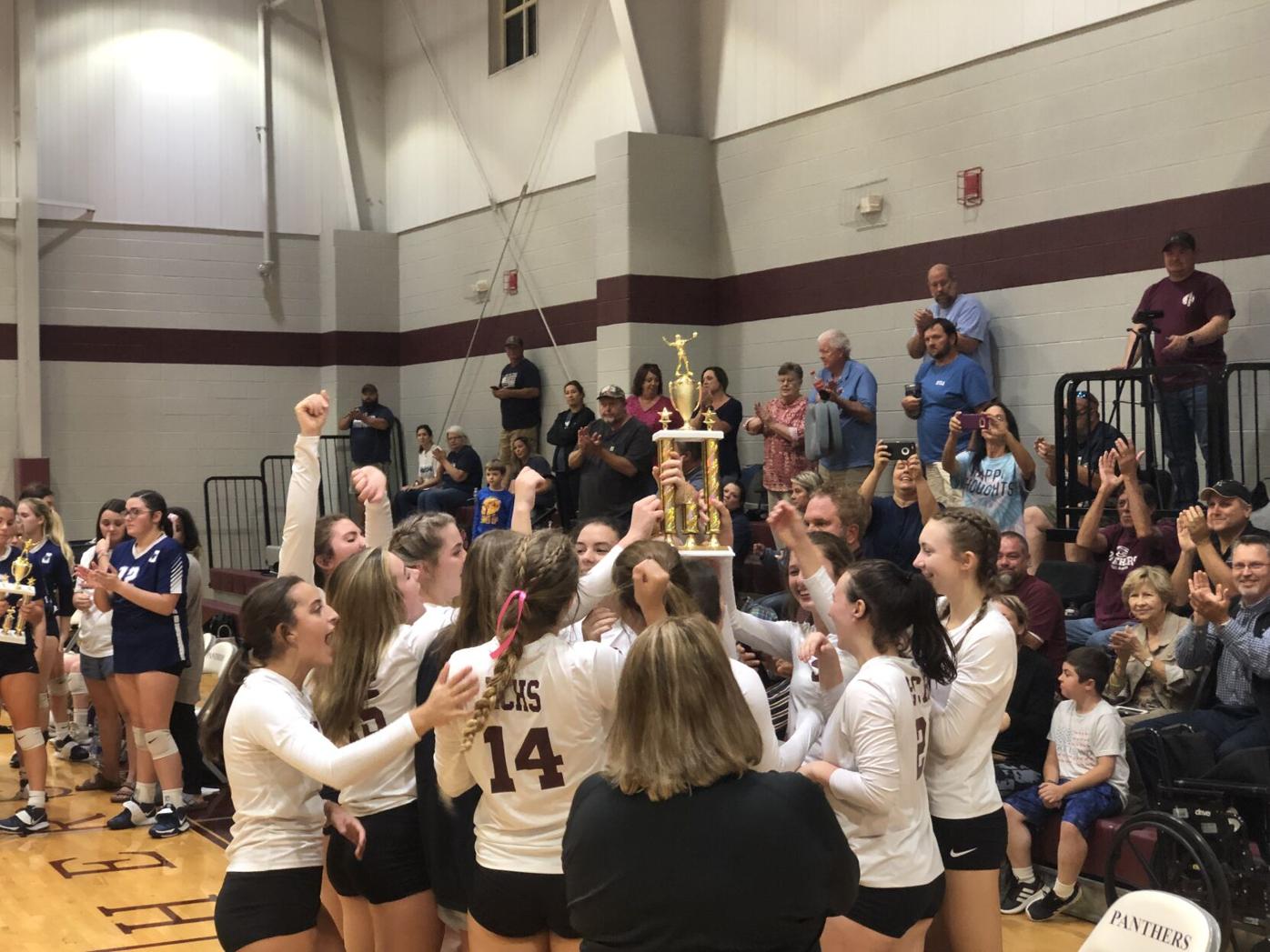 The win is both the Lady Panther’s and head coach Kim Moncrief’s 12th consecutive area championship. Elmore County swept both games they played on Thursday after beating Holtville 3-0 (25-4, 25-7, 25-8) in the first round of the tournament.

“It’s a lot of fun and it’s an amazing to get these girls to buy in to what we do and practice all the time like they do,” Moncrief said. “For them to be able to produce like they do year after year after year has just been incredible. I’ve been here 13 years and every year it seems to get more special. This was a really hard-fought one. The competition was extremely tough.”

Lozada started her onslaught at the net early in the game against Jemison.

She slammed home two of the first three points of the game to put Elmore County up early, 3-1, then got a kill to put the Lady Panthers up, 7-6.

She had a team-high six kills in the first set, and Elmore County took a 1-0 lead after winning 25-22.

“Coranda just plays her heart out every single time she gets up to the net,” Moncrief said. “You wouldn’t think that a 5-foot-3 person could play front row as well as she does, but she puts her heart into it and gives it her all. We knew tonight she would do that.”

The two teams went back-and-forth in the second set, and Elmore County led 12-10 early, and Lozada separated the teams in a grueling stretch. She had one kill to put the Lady Panthers up, 13-10, then had two kills during a 6-0 stretch that left Elmore County up, 19-11.

Elmore County carried that momentum to the end of the set, and won 25-14 after a block and kill by freshman Ally Orr ended the set and put Elmore County up, 2-0.

Orr played well in both the first and second sets, but really took over at the net in the third set. She scored the first two points of the set for the Lady Panthers, then powered home four more kills as Elmore County cruised to the 25-13 win and the 3-0 sweep.

Orr finished the night with 11 kills and 2 blocks at the net.

“Ally, being a freshman, showed a lot of composure coming in and getting the hits when we needed them,” Moncrief said. “She was trained to be a middle hitter, but when Lizzy (Brown) got hurt, we moved her to outside and she’s just gotten more confident as the season goes on. Now we look to her to make the plays. It’s incredible for a freshman to do that.”

As well as Lozada, Orr and company played at the net, Elmore County’s back row matched the offense’s level of play.

Jemison has multiple powerful hitters at the net, especially Jaclyn Lowery and Kinsley Martin, but Elmore County’s defense held them in check with dig after dig on the night.

The two girls combined to still have 11 kills, but that ended up being 7 kills less than the 18 they combine for per each three-set match they play.

“They have some really quality hitters on their team, but we were especially concerned with two of them, and we knew we would have to do what we could to get the balls off the floor that they would hit,” Moncrief said. “Our back row and our defense played incredibly wall and they got the ball to our setters so they could turn something off-system to something in-system. I believe that our defense doesn’t get enough credit.”

Elmore County 3, Holtville 0: Elmore County cruised to a sweep of Holtville in the first round of the area tournament. Holtville, which went winless in area play this year, saw its season come to an end with the loss.

Elmore County cruised to a 25-8 win in the third set to complete the sweep. Lozada finished with a game-high 13 kills, while Orr added 7 kills and Natalie Sullivan and Abby Williams each had five service aces.

PUBLIC NOTICE NOTICE TO CREDITORS OF ESTATE STATE OF ALAB…