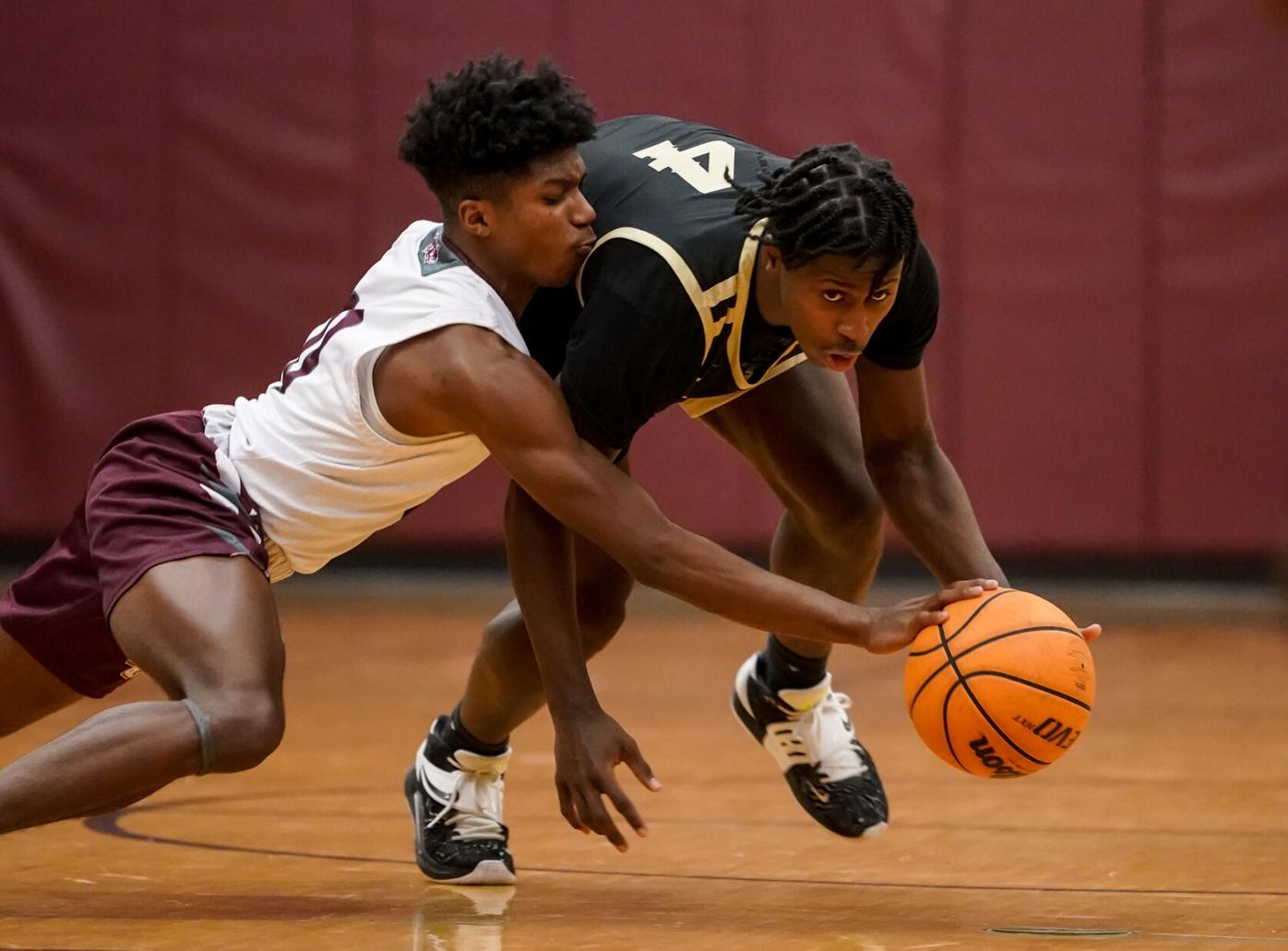 A Wetumpka player is fouled during an AHSAA basketball game between the Benjamin Russell Wildcats and the Wetumpka Indians at Stanhope Elmore High School in Millbrook, Alabama on Thursday, Jan. 13, 2022. [Alex City Outlook/ Jake Arthur] 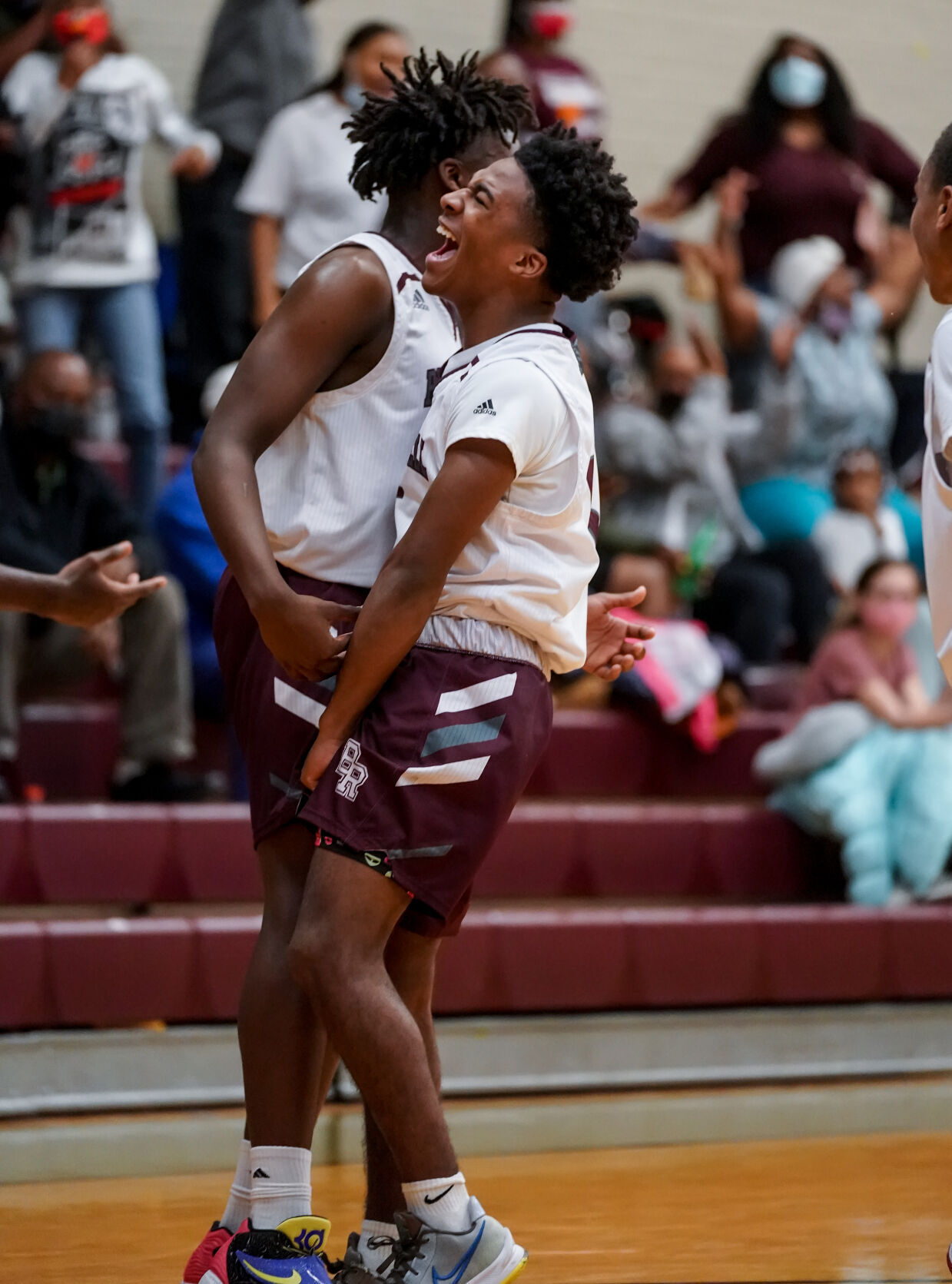 Tyquan Williams smiles as he is helped up by Quez Thompson after being fouled during an AHSAA basketball game between the Benjamin Russell Wildcats and the Wetumpka Indians at Stanhope Elmore High School in Millbrook, Alabama on Thursday, Jan. 13, 2022. [Alex City Outlook/ Jake Arthur]

A Wetumpka player is fouled during an AHSAA basketball game between the Benjamin Russell Wildcats and the Wetumpka Indians at Stanhope Elmore High School in Millbrook, Alabama on Thursday, Jan. 13, 2022. [Alex City Outlook/ Jake Arthur]

Tyquan Williams smiles as he is helped up by Quez Thompson after being fouled during an AHSAA basketball game between the Benjamin Russell Wildcats and the Wetumpka Indians at Stanhope Elmore High School in Millbrook, Alabama on Thursday, Jan. 13, 2022. [Alex City Outlook/ Jake Arthur]

One would think Alexander City was suffering a drought the way Chris Foster and Quez Thompson felt the need to rain down 3s in the third quarter.

Benjamin Russell boys basketball entered the penultimate period up a mere two points at 32-30, but a 25-point third ensured the margin didn’t remain small for long.

Despite being undersized, tough defense and two 20-point performances from the Wildcats’ two star guards delivered the team a 73-58 win at home to move Benjamin Russell to 2-0 in area play. One win in its last two area games will secure home court for the area tournament.

“This is huge for our program moving forward, trying to get our goal of being a state champion,” Benjamin Russell coach Jeremy Freeman said. “The key is to host the area tournament. If you can host you have a better chance of going to the next round, the sub-region, and then that’s how we get to the regional tournament down there in Montgomery. But hats off to the guys tonight, they really played outstanding.”

Foster found 27 points worth of netting in a hot shooting night, knocking down five triples total. Thompson grabbed 22 of his own and hit four additional 3-pointers.

Of the nine triads Foster and Thompson splashed home Thursday, five came in the third quarter.

It took a concerted effort for the Wildcats to break through what have been some third-quarter blues as of late and put up the quarter-century’s worth of points that they did.

“Going back to the last two third quarters, we’ve been a little stagnant coming out,” Freeman said. “I impressed on them how important it was to continue to put pressure on these guys.”

Foster made a habit of hitting shots from the top of the key off the dribble, the shot that’s become his bread-and-butter this season.

Even more impressive to Freeman than his near-30-point outburst was his playmaking.

“Not just points tonight so much as — and this is what I’ve been trying to impress upon him — being a facilitator,” Freeman said. “Because that allows other people to get involved and make it even easier for you. He did an outstanding job of finding people tonight, and also making open buckets.”

Wetumpka tried to find ways to slow the offensive onslaught down.

One of its go-to tactics was to dish the ball inside to forwards Stone Minnifield or P.J. Merkerson or have Rogers drive to the rim. Wetumpka attempted 11 free throws in the second half as opposed to just four in the first.

Still, it was Benjamin Russell’s group defensive and rebounding effort that held steadfast, Freeman said, and noted holding a team with multiple players at or above 6-foot-4 to 58 points is no easy task.

“This was really tough on us tonight,” Freeman said. “They’re real big and real physical, it just continued to weigh on us offensively. It took a toll on us to get a rebound and to make shots. But defensively, to hold them under 60, that’s strong for us. I was really, really proud of our defensive effort.”

It wasn’t enough to get the Indians back into striking distance, however. The Wildcats outpaced them 16-10 in the final quarter.

Benjamin Russell shot 7-for-8 at the free throw line down the stretch to keep Wetumpka at arm’s length.

“Very clutch down the stretch,” Freeman said. “We got the right people up to the line and they did a great job closing us out.”

Benjamin Russell and Wetumpka both continue area play in their next games, with the Indians welcoming Stanhope Elmore Saturday and the Wildcats doing the same Tuesday.

“I’m just thankful for Wildcat pride and for Alexander City man,” Freeman said. “We’re starving. We’re hungry. We love our high school sports in Alexander City, love our teams. And we’re just trying to give them something to let them know that we appreciate them. And we’re going to continue to get out there and push forward, and just trying to capture that elusive title. Because it takes some breaks, takes opportunity and takes good ballplayers and good defense to feel those kinds of things. We’ve got our eyes on the prize and we’re going to continue to push forward.”