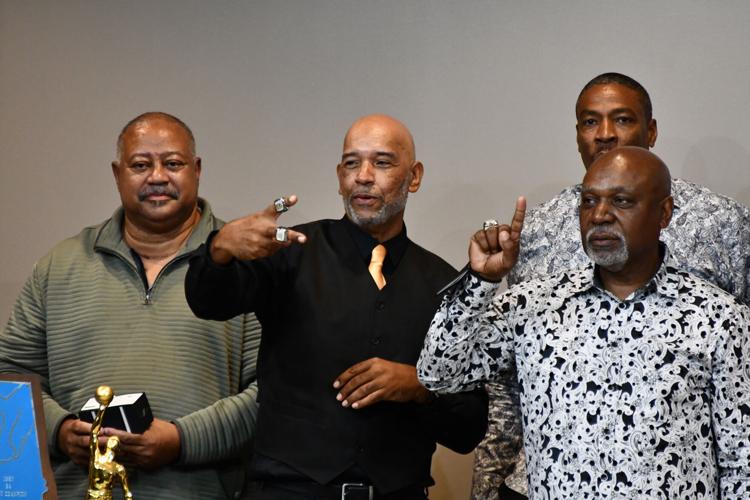 Players and coaches of the 1979 and 1980 Wetumpka Indians basketball teams try on their championship rings after 43 years. 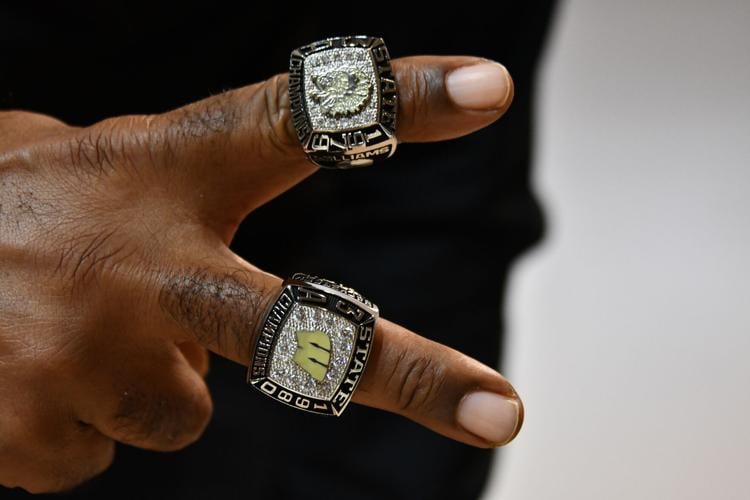 Players and coaches of the 1979 and 1980 Wetumpka Indians basketball teams try on their championship rings after 43 years.

As the saying goes, better late than never.

No one knows that better than the 1979 and 1980 Wetumpka Indians basketball team members and staff, who received their championship rings on Sunday after 43 years of waiting.

Surrounded by friends, family, and members of the community, the men and women of Wetumpka High School’s only two basketball championships finally got their championship rings from the AHSAA.

The reasoning for why the teams never received their rings originally is widely disputed, but that is all in the past as former players and coaches now have their jewelry to celebrate their historic accomplishments.

“We wanted to bring some excitement and joy to Wetumpka,” said Curtis Mitchell, member of the ‘79 team. “That was our one goal.”

As attendees filed into the Wetumpka Civic Center, a slideshow was playing, displaying pictures and memories of those legendary seasons.

The crowds murmured after every picture, as people remembered their friends, classmates and former team members as they once were.

Nowadays, the afros are long gone and the playing days are over, but the memories made along the way remain the same.

“The experiences we had impacted my life forever,” said Charlie Crenshaw, member of the ‘80 team.

An almost 20 minute documentary was made about the back-to-back championship teams. While the documentary highlighted some of the greatest moments in Wetumpka High School’s history, it also showed just how difficult it was to get there.

43 years ago was an age in time much different than the one we are in now. Aside from the fact that the three-point line had not been implemented and dunking was not allowed, the mostly black members of the championship teams had to fight for their right to even be on the teams.

Wetumpka High School integrated back in 1965, and the first real testament to Wetumpka basketball prowess in the late-70s was the 1975 team, which was nearly the first championship team.

That squad was one win away from playing for a championship in Tuscaloosa, now referred to as “Title Town” for the ‘79 and ‘80 teams.

The ‘75-squad was about five men deep, just enough to have a full team but hardly enough to withstand a long playoff run.

Kenny Marshall, member of the ‘75 team, said his squad paved the way for the future championship runs and lamented that had his team been deeper, he too would have earned his ring.

“It didn’t work out for us,” Marshall said. “We set the tone for those guys. They had the same kind of identical team we had.”

Back in those days, for the ‘75, ‘79 and ‘80 teams, they mainly played on make-shift goals in their backyards or on the outdoor courts at the old Wetumpka Rec.

All that is left of the Rec court is the asphalt, now a parking lot.

Ed Jackson of the ‘75 team said playing at the Rec in the summer was what gave him a love for basketball. Bill Franklin said the memories he and his buddies made out there can’t be taken by anyone.

With the precedent set by the team in 1975, the 1979 team found its stride early and did what no team before it had ever done: go the whole way.

The 1979 squad finished the year 29-1, for what is widely regarded as one of the best seasons of basketball in Alabama state history.

Winfred Wise, member of the ‘79 squad, said adjusting to playing at an integrated school was a challenge before the season.

He said he and other black players had to play what he called more “organized” ball, but said when push came to shove, he and his teammates simply “did it on our own.”

The greatest aspect of the ‘79 team was exactly what the ‘75 team was missing. Depth.

The ‘79 team was so good in fact, and so deep, that Bernard Mack made the 1979 All-Tournament team, despite never starting a game.

Mack was a bit before his time in that regard, as the term “sixth man” was not in basketball vernacular until the 80s.

Wetumpka did not blow every team out on its way to the history books, and very nearly did not win at all. With the Championship on the line, it was up to Danny Williams to sink a pair of free throws to give the Indians a lead late in the title match.

As for what Williams was thinking before he attempted his shots?

“I did not want to go home empty handed,” Williams said with a laugh.

With the big blue trophy in hand, the goal for the 1980 season was simple. Win another. Why not?

“The pressure was off in 1980,” said Lewis Washington. “We never felt like we could lose a game. We never lost a game at home. Those seasons made a whole lot of difference in our lives.”

1980 assistant coach Charles Johnson said it took his team very little motivation at the time to try and go back-to-back. The team was returning solid players, and adding the best talent the school had to offer.

“It did not take much motivation in 1980,” Johnson said. “We tried to stay focused because we knew we had something special.”

Something special they had indeed, as the team went 28-4 on the year, returning home with a second trophy in hand.

That team was so good in fact, that every senior on the squad was offered a college scholarship from a team, though no one can remember exactly what school it was.

College scholarship or not, rings or not, the teams had each other and still do to this day. Their mark on the city of Wetumpka will live on far after they are gone.

Up on the Civic Center stage, the men and women of Wetumpka’s most heralded basketball teams finally received their rings. Some almost in tears, many hugging, the day had finally come when the two squads were recognized for just how great they truly were.

Each ring has “back2back” written on it, to forever memorialize one of the greatest runs in Alabama’s basketball history.

The players would have waited another 43 years if they could. But Sunday was the ultimate day for those select few to be recognized for what they are, and always will be. Champions.

BRIAN'S TREE SERVICE --TREES CUT FROM THE TOP DOWN! --SAF…

BECOME A DENTAL ASSISTANT IN 7 WEEKS!

BECOME A DENTAL ASSISTANT IN ONLY 7 WEEKS! Visit our webs…