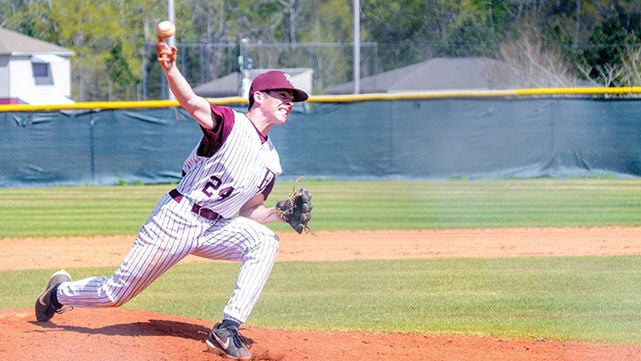 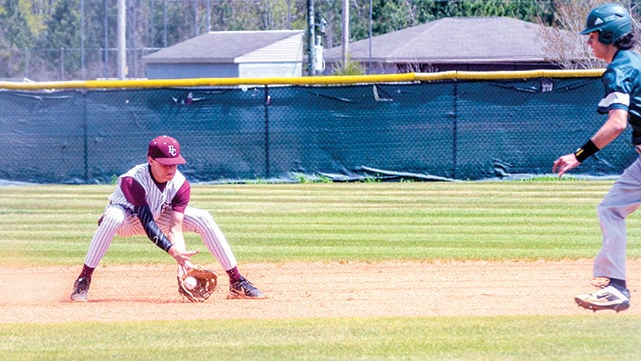 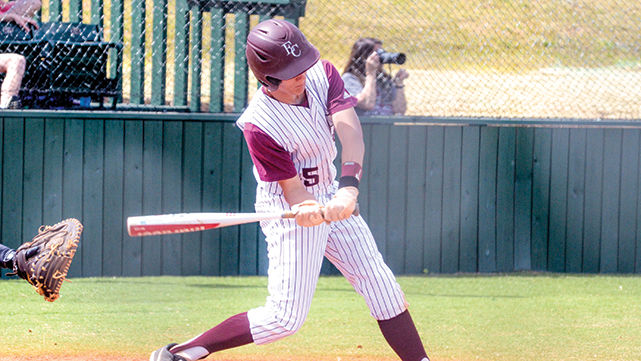 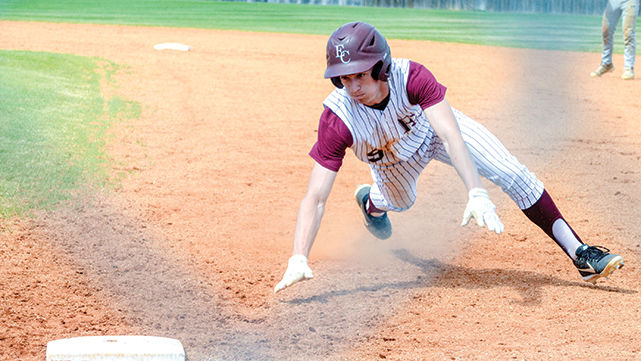 Elmore County’s Payne Watts dives back to first base during a pickoff attempt in Saturday’s game against Dallas County. 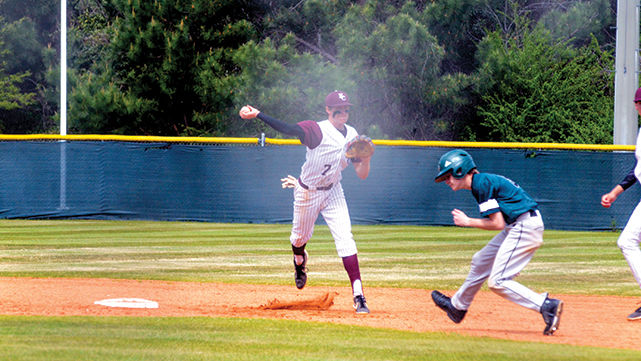 Austin Downey (7) throws to first attempting to turn a double play during Elmore County’s game against Dallas County on Saturday. 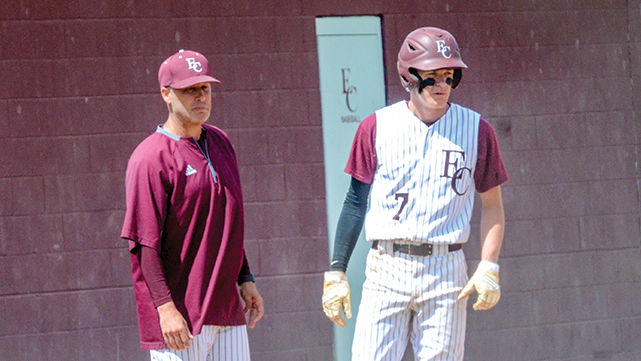 Elmore County coach Michael Byrd and Austin Downey (7) look to the mound for the next pitch during Saturday’s win over Dallas County.

Elmore County’s Payne Watts dives back to first base during a pickoff attempt in Saturday’s game against Dallas County.

Austin Downey (7) throws to first attempting to turn a double play during Elmore County’s game against Dallas County on Saturday.

Elmore County coach Michael Byrd and Austin Downey (7) look to the mound for the next pitch during Saturday’s win over Dallas County.

With two outs and nobody on base in the bottom of the fifth inning, Elmore County’s Taylor Henderson had four batters ahead of him but he still knew he would be up to plate before taking to the field. Henderson entered the batter’s box with runners on the corners while trailing 9-8 and he roped a base hit to right field, scoring two runs to give the Panthers their first lead of the game.

“I expected to come up,” Henderson said. “We just needed to keep that energy up and that helped carry us. It’s a great feeling to come through there.”

Elmore County (13-5) fell behind 6-0 in the second inning but never game up on the game. After Henderson’s RBI single, the Panthers added five more runs in the inning and never gave up the lead on their way to a 17-12 win Saturday.

“We have preached since Day 1 to fight with two outs and two strikes,” ECHS coach Michael Byrd said. “You have to be ready to play that next pitch and things will start rolling together.”

The Panthers had the bottom of their order up in the fifth inning but nine-hole hitter Payne Watts came through with a leadoff triple to get things started. Chase Wilson brought Watts home on an RBI single and Elmore County had its next seven batters reach base as it took a 15-9 lead after five innings.

It was the fifth time this season Elmore County has scored at least 15 runs in a game. The Panthers had nine different players score a run in the game and six players record at least one RBI.

Henderson reached base three times in the game and scored twice. Trey Brand led the Panthers with five RBIs while Watts led the team with three runs scored.

Elmore County started Brady Lewis on the mound but he struggled with his command and allowed six runs (two earned) in less than two innings pitched. Brody Ward could not stop the bleeding, walking three while allowing one hit and two more runs as Dallas County held an 8-3 lead.

Zach Jones entered in the third inning to attempt to limit the Hornets with the bases loaded and no outs. He pitched the final five innings for the Panthers, allowing just two earned runs while striking out three.

“He comes in and he just competes,” Byrd said. “When you throw it over the plate, you have a chance to win. He’s a sophomore and we pulled him up from JV. Now he’s probably worked his way into the No. 3 starter spot.”

Elmore County entered Saturday’s game losing three of its last four games. Despite knowing the upcoming area games were a priority, Byrd said it was good for his team to build some momentum entering this week.

“It’s real big for our morale this week,” Byrd said. “The big game is on Tuesday and we want to go in with confidence, especially on offense. We’re going to have score some runs and we know that.”

Elmore County split its first area series with Handley and will now need to climb out of a hole to grab a playoff spot. It does not get easier for the Panthers this week as they play Holtville on Tuesday and Thursday with the possible tiebreaker being played on the road Thursday.

“We’re just going to try to win that first one,” Byrd said. “We want to play that first one, see what happens and readjust for the next one. We know all those scenarios are endless so we just worry about one game at a time right now.”