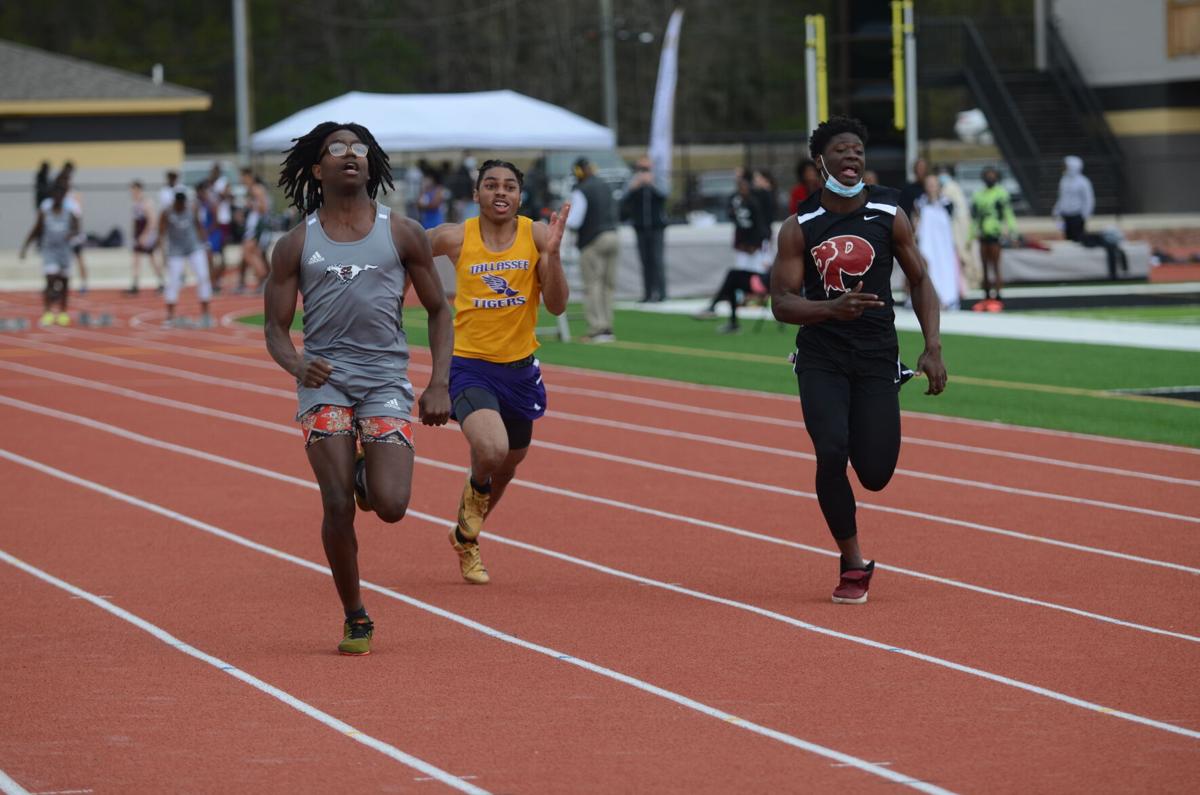 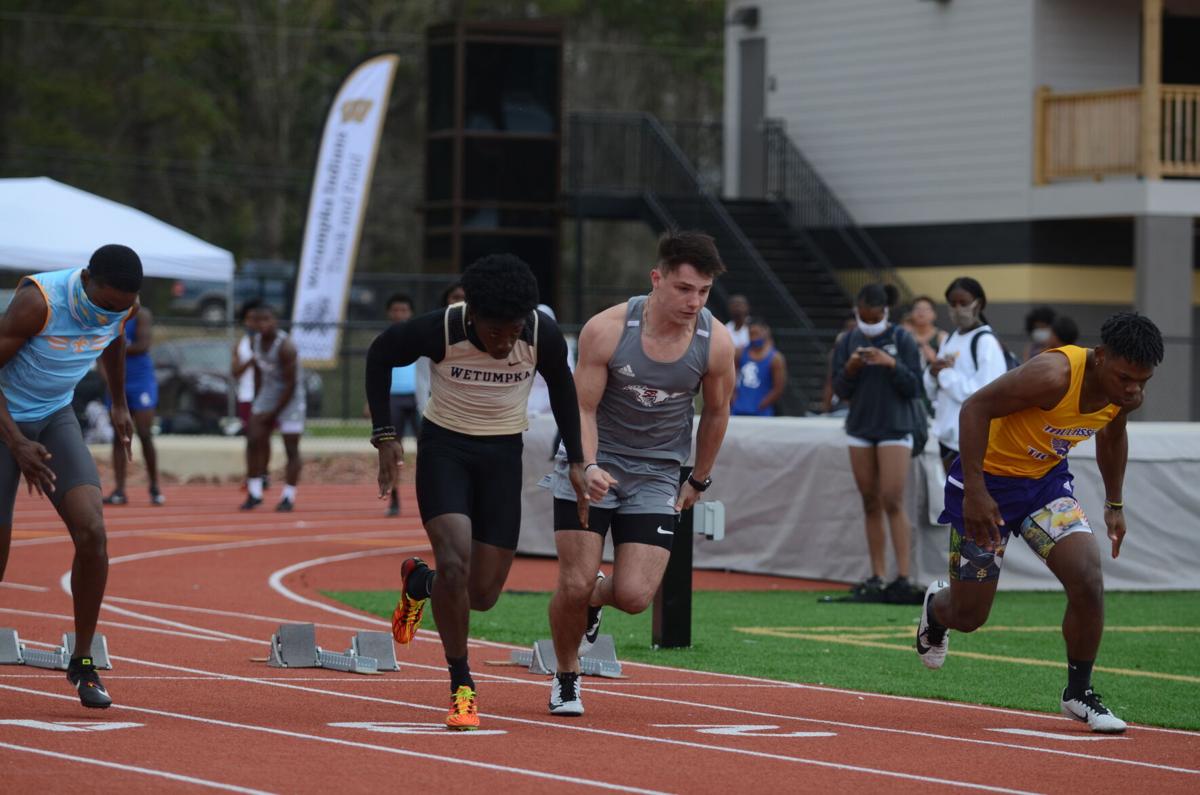 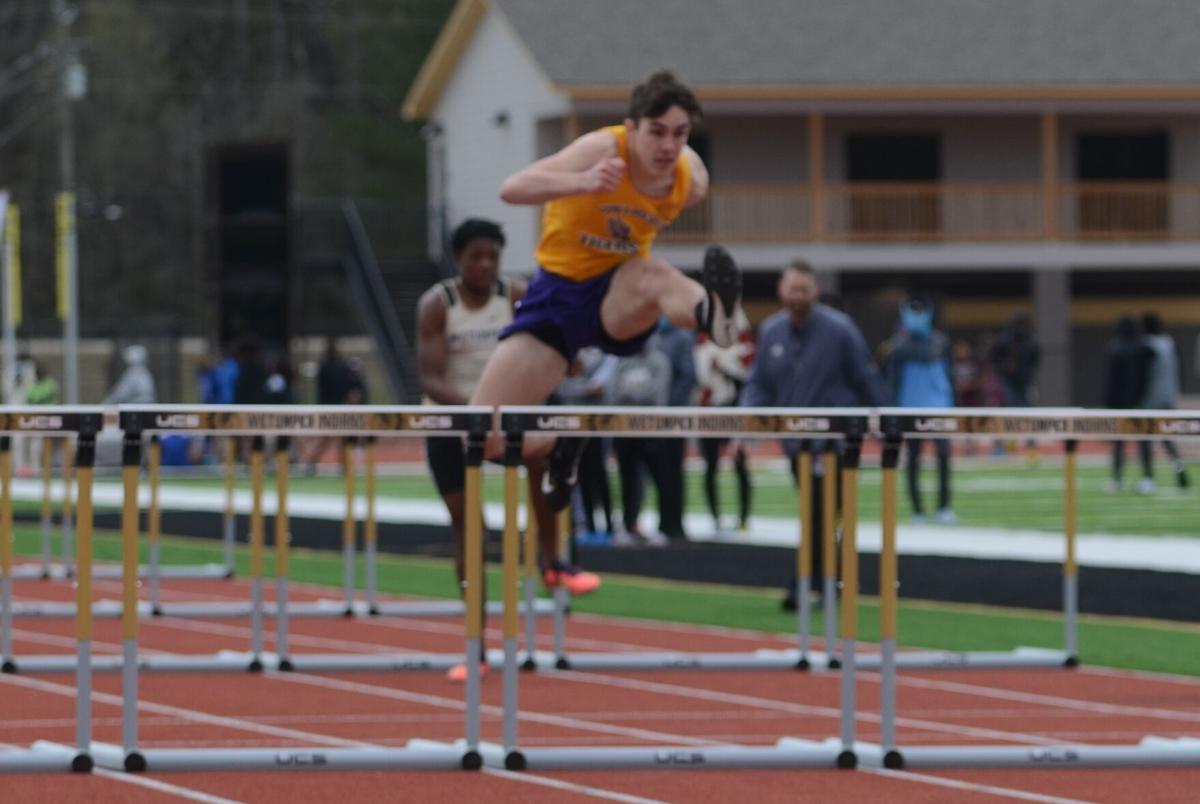 Andy Anders / Tallapoosa Publishers Tallassee senior hurdler Michael Moore pulls away from the rest of his heat in the 110-meter hurdles at the River Run Invitational. 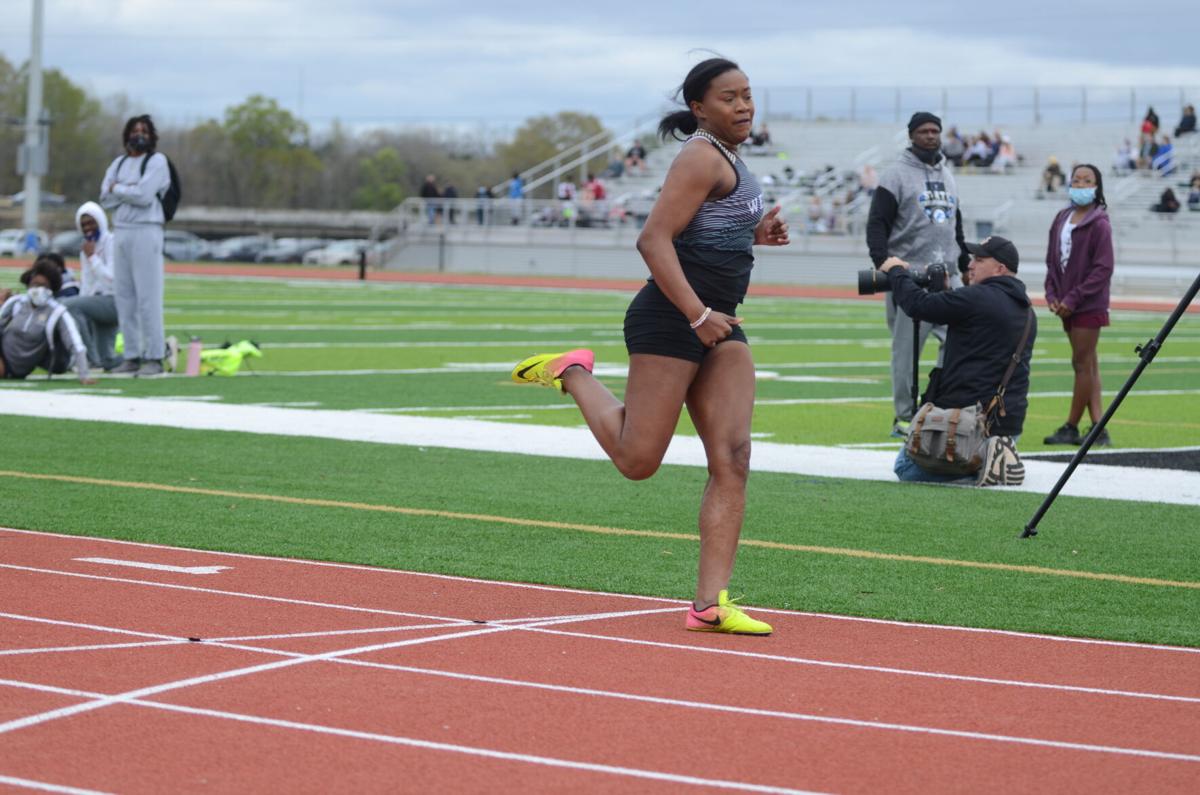 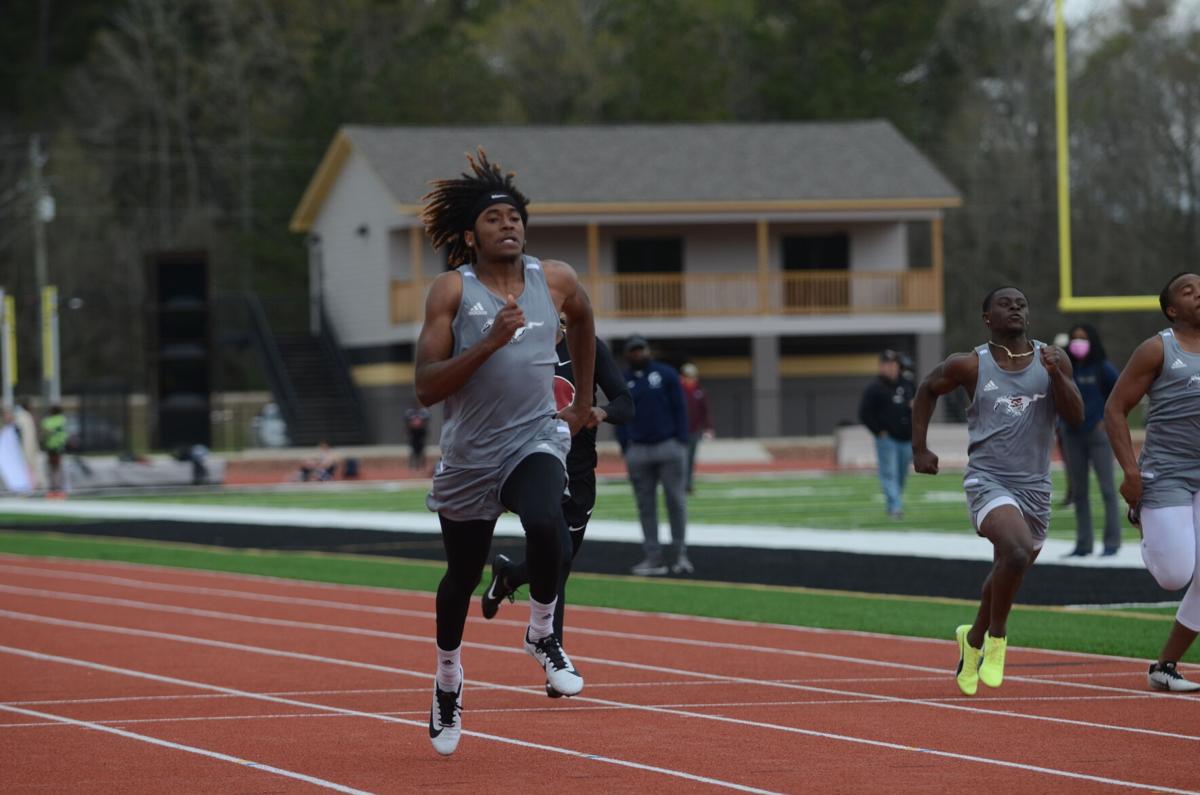 Andy Anders / Tallapoosa Publishers Tallassee senior hurdler Michael Moore pulls away from the rest of his heat in the 110-meter hurdles at the River Run Invitational.

The Wetumpka Sports Complex served as host to the annual River Region Invitational Friday, a track meet with 11 schools in attendance including local programs such as Wetumpka, Stanhope Elmore, Tallassee, Elmore County and Holtville.

On the boys’ side, Wetumpka took home the team title for the meet, racking up 191 points across 17 scored events. Tallassee finished second with 121 points, with Stanhope in third at 72.

Wetumpka came up 34 points short of Brewbaker Tech for first place as a team on the girls’ side, with Stanhope coming in fifth as the next best finisher from Elmore County.

Wetumpka coach Warren Brown said despite his team’s first-place finish, several individuals fell short of setting PRs, which is always a goal in a large meet.

Brown said the fact that he was in charge of overseeing and coordinating the meet may have contributed in some ways -- he was unable to fully focus on coaching his athletes.

For the first meet hosted at The Wetumpka Sports Complex, however, Browns said he was very happy with the result and thanked the people that helped make it a possibility.

“I had a great supporting cast,” Brown said. “All my coaches and volunteers, especially coach Rob Weighall, did a great job of putting this meet together.”

Thrower Colby Golson pieced together one of the better individual performances at the invitational.

Golson recorded a meet-record throw of 47-10, taking first place in the discipline by a margin of more than five feet.

He would’ve set the record for discus too had Saint James thrower Connor Owens not been in attendance, with Golson’s throw of 137-10 besting the old high-water mark but finishing second for the meet behind Owens’ 152-4.

“Colby’s been doing very well,” Brown said. “He’s one of my best throwers. He’s a senior. So yeah, I’m proud of Colby for what he did. He and his family also helped organize and get this meet together.”

The Indians picked up two other meet records Friday, both on the girls’ side.

Jumper Jamya Johnson not only set the new long jump record at 16-4, but she also finished second in the high jump and fourth in the triple jump for the meet, collecting points in a variety of ways for Wetumpka.

She even ran the first leg of the Indians’ first-place 100 relay team.

“She’s probably gonna do heptathlon for us in the future,” Brown said. “She’s only in tenth grade. I was proud of that long jump, she scratched on one earlier that probably went a little bit farther.”

Morgan Causey set a meet record in the javelin by four inches with a throw of 102-10, capturing first place Friday.

Kennedy Jones ran the only time under 20 seconds in the girl’s 100-meter hurdles, clocking in at 19.86 seconds.

Jumpers Jalen Johnson and Avery Thomas swapped first and second place on the triple jump and long jump, respectively. Johnson recorded a mark of 41-10 on the former event, besting the field by just under four feet.

Kyler Adams took first place in the boy’s 800-meter run, while Gavan Baxley picked up first in the boys 3200 and third in the 1600. Reggie Monroe took first in boys high jump as well.

Tallassee senior thrower Will Smith made the biggest waves of any competitor for the Tigers Friday, with his javelin toss of 146-4 defeating the old meet record of 141-7.

He did it on his final attempt, having already secured first place in the meet -- the next best thrower recorded a mark of 116-10.

His marks have been steadily improving this season as he works to get back to his PR.

“As a sophomore, he was right around 152. He’s starting to get back there,” Tallassee coach Danny Worley said. “Last year, having the year off and not getting to throw, not having a track season kind of hurt him.”

Tallassee opened its day with a victory in the boy’s 800-meter relay, the first event at the first meet in the history of the Wetumpka Sports Complex.

Worley and his team were honored to christen the new arena.

“We were gonna run a younger group, and the older group, they talked about it yesterday at practice and they said, ‘Let’s try to win that thing, it’s the first event on the track,” Worley said. “I’m like, ‘Y’know, that’s a pretty good little goal. That’s pretty neat, we’ll try that.’ And that’s what we did.”

Tallassee’s 400 relay team also closed the meet with a win.

Distance runner Woodrow Dean took first place in the boys 1600, finishing as one of just two runners under the five-minute mark at 4 minutes, 56.48 seconds.

Sprinters Azlan Williams and Devion Thomas finished .01 seconds apart from each other in separate heats to capture first and second in the meet. Williams took the top prize at 11.56 seconds, Thomas came in second with an 11.57.

Thomas’s time was .12 seconds ahead of the next-best runner.

“Azlan Williams and Devion Thomas, in their first year of running track, have been inspirational for the Stanhope Elmore high school track team,” Stanhope coach Ronnie Rafferty said. “They continue to work hard to get faster and their teammates want to compete with them, so they put in the extra work as well.”

Hurdler Sam Barlet gave Elmore County a first-place finisher at the River Region Invitational Friday as well, winning the boys 110-meter hurdles with a time of 16.63 seconds. He bested the field by .48 seconds.

“He got a really good start, which helped, and his technique over the hurdles was tremendous,” Elmore County coach Joseph Snelick said. “But more than that he is the leader of the team. He encourages people and sets a great example. Anytime I need something done, I go to him and he gets it done.”

Other top performers for the Panthers included hurdler Courtney Sides, who took second in the girl’s 100 hurdles, and distance runner Sawyer Lett, also second in the boys 3200.

Holtville recorded four top-ten finishes at the meet Friday, with two of them coming from sprinter Lamonica Smith. Smith finished seventh among a deep girls 100-meter dash field that included Alabama commit and Brewbaker Tech star Chanice Spicer and came in sixth in the long jump.