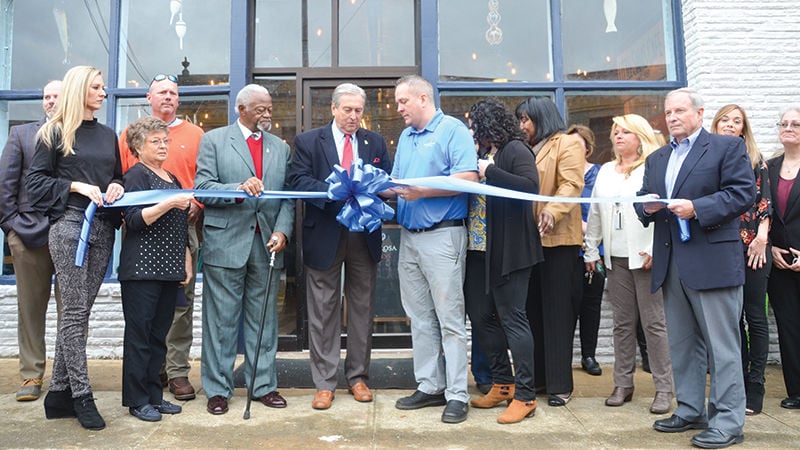 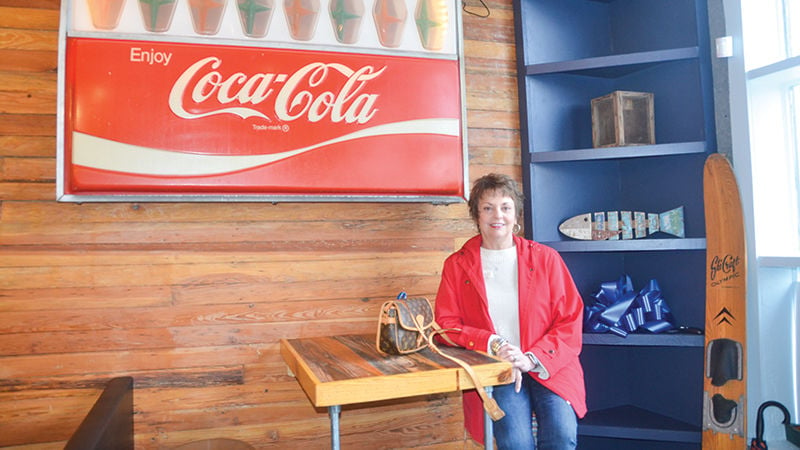 Kathy Willis sits in a corner of the Coosa Cleaver that was decorated to honor the restaurant’s predecessor, Little Sam’s Cafe. (Amalia Kortright/The Herald)

Kathy Willis sits in a corner of the Coosa Cleaver that was decorated to honor the restaurant’s predecessor, Little Sam’s Cafe. (Amalia Kortright/The Herald)

The Coosa Cleaver, which is a companion to the Cork and Cleaver restaurant in Montgomery, celebrated its opening with a ribbon-cutting ceremony on Thursday.

Ryan Friday, who co-owns both restaurants with his brother, Benji, and his wife, Danyalle, said the Coosa Cleaver features a fast-casual setting on the first floor and a full bar on the second.

“We definitely bring an incredible atmosphere. It’s a cool place,” Friday said. “Downstairs, we try to theme it like a river camp, so you feel like you can sit on the river and have something to eat. Upstairs is a little bit cleaner. We have the rolling doors, which gives you sort of a rooftop feel. Whenever we have the festivals in downtown, we hope to be able to be a part of that, so you can take part in it but still be in the restaurant.”

Friday said the food served at the Coosa Cleaver is similar to the menu at the Cork and Cleaver.

The Fridays began renovating the restaurant in August.

“The (Wetumpka) downtown redevelopment authority came to talk to me about it, and we came to the conclusion that this was a good place with an open market,” Friday said. “It had some value to it.”

Because the Coosa Cleaver is occupying the space once known as Little Sam’s Café, Friday said they made a point to pay homage to the building’s history by incorporating some of the staples of the original restaurant.

“We have the original Little Sam’s Café Coca-Cola sign, which was repainted by Shellie Whitfield at the Big Fish Art Studio, and we have a barstool in the corner, which was one of the originals from Little Sam’s. We tried to create this whole area in the corner as a tribute to Little Sam’s,” Friday said. “There’s also a piano that was left in the building when I got here and we incorporated that into the bar upstairs. I don’t really know the history behind the piano but it’s still here.”

Wetumpka Mayor Jerry Willis said he remembers dining at Little Sam’s Café and is appreciative of the restaurant’s historical references.

“There was a little lady whose name was Miss Fannie and she waited tables here for years and years and years. It got to the point where she could hardly walk but she was waiting tables,” Willis said. “You open this door and she’d never look but she’d holler, ‘Come in, Dobbins!’ Everybody was named Dobbins. I don’t know where she got that from.”

Instead of acting as a competitor, Friday said the Coosa Cleaver’s goal is to promote the businesses of downtown Wetumpka.

“The main thing I want to do is help revitalize downtown Wetumpka. By working with the downtown redevelopment authority, we can bring more businesses to Wetumpka, we can help bring more business to the current businesses that are already here,” Friday said. “There are several other good restaurants close by and I want to be a complement to that and continue to help make it a destination.”

Before it opened, Wetumpka Area Chamber of Commerce Associate Director Jamie Young said the Coosa Cleaver was already having an impact on surrounding businesses.

“I’ve already heard from a couple of different business folks who have said that they’re going to adjust their hours, depending on the Coosa Cleaver’s hours. They believe that’s going to generate a lot more walk-in revenue for them,” Young said. “I know that (the Coosa Cleaver) will do great.”

Willis commended many people for their work in getting the restaurant open, including the Fridays and members of the Wetumpka Downtown Redevelopment Authority, the Wetumpka City Council, the Wetumpka Area Chamber of Commerce and Main Street Wetumpka.

“I think this is just the first of many things to come in Wetumpka and we’re so excited to see this,” Willis said.