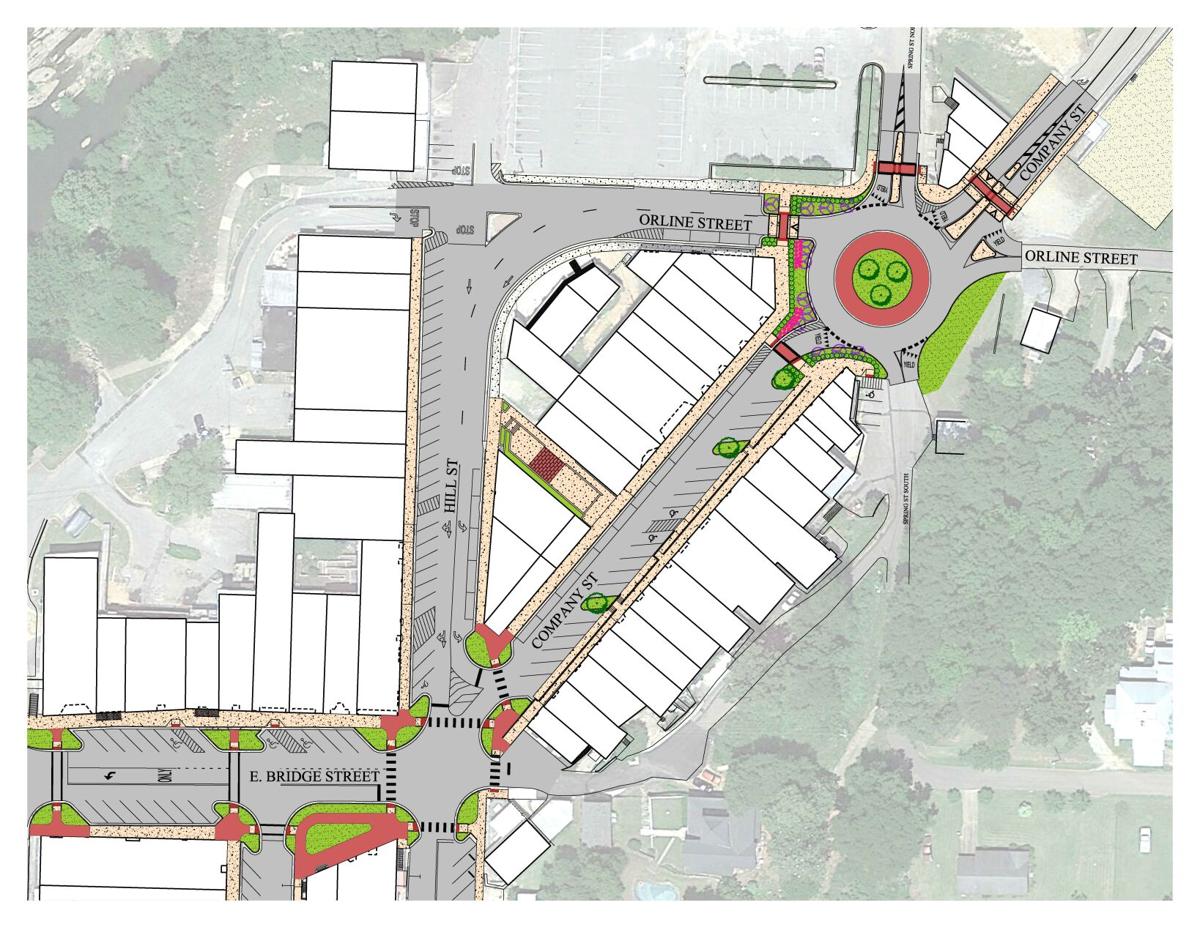 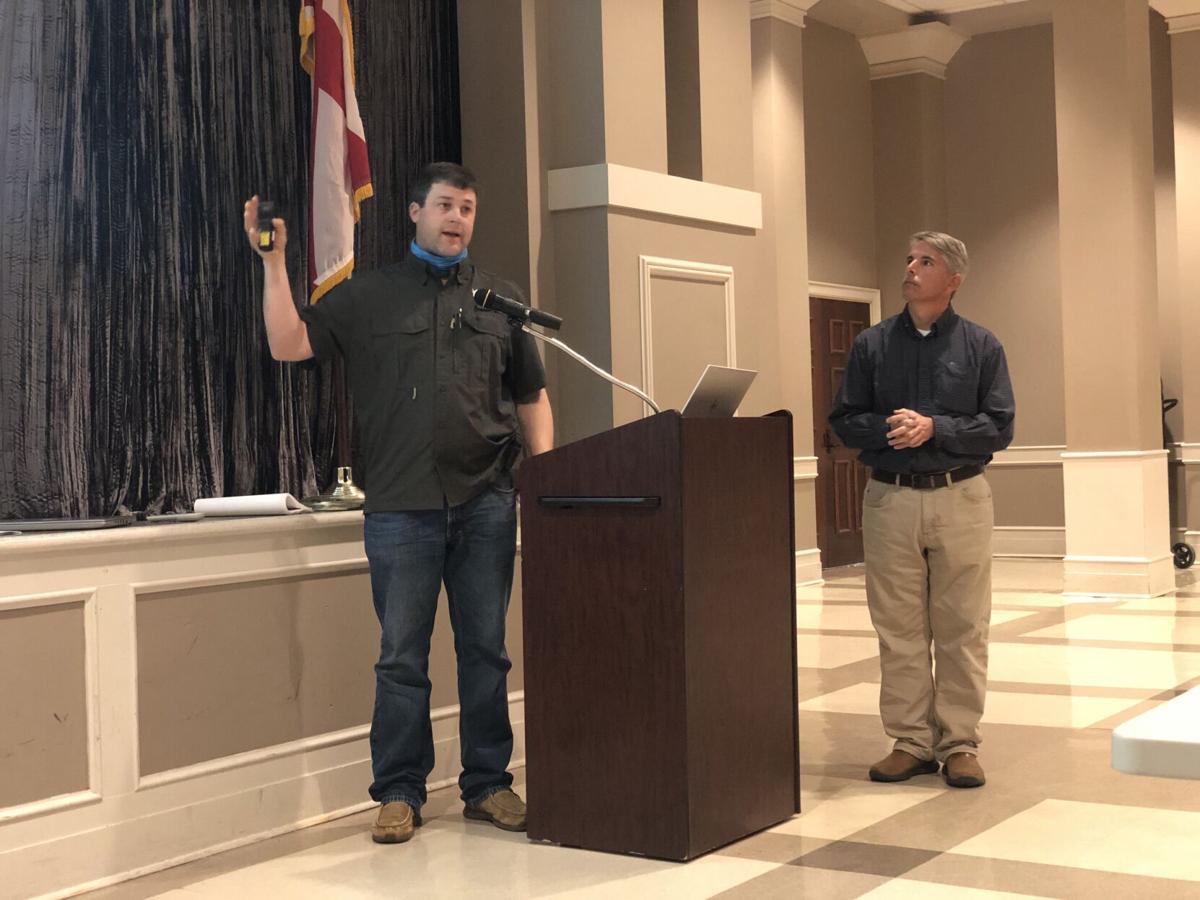 Justin Barrett, director of development services for Wetumpka, and Jeff Fennell, an engineer with Goodwyn Mills and Cawood, led the meeting and explained what will take place over the next several months. The Herald / Briana Wilson 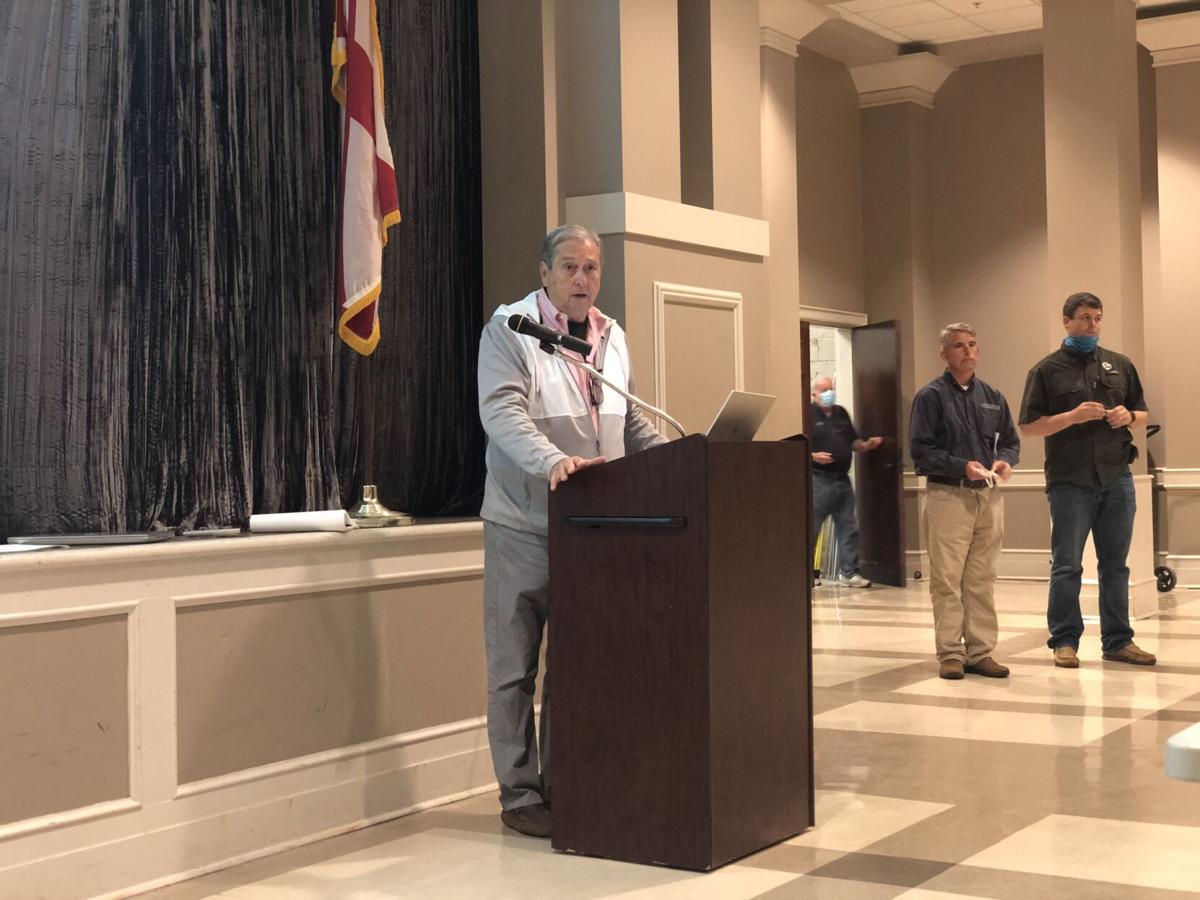 Justin Barrett, director of development services for Wetumpka, and Jeff Fennell, an engineer with Goodwyn Mills and Cawood, led the meeting and explained what will take place over the next several months. The Herald / Briana Wilson

Downtown Wetumpka business and property owners gathered at the Wetumpka Civic Center on Thursday to discuss upcoming revitalization projects that call for new sidewalks and a roundabout to be constructed downtown.

The total budget for the construction project is $1.47 million. The project is being funded with $1.18 million in federal funds allocated by the Montgomery Metropolitan Planning Organization, and $295,958 from the city of Wetumpka.

Goodwyn Mills and Cawood is providing engineering services for the project while Gillespie Construction was awarded the construction bid.

The construction contract allows for 175 working days to complete the project, which equates to roughly nine months. Construction is set to begin on Feb. 22.

Justin Barrett, director of development services for Wetumpka, and Jeff Fennell, an engineer with Goodwyn Mills and Cawood, led the meeting and explained what will take place over the next several months.

Redoing the sidewalks will require parking spaces to be blocked off to allow crews enough space to work. Mayor Jerry Willis urged the business owners to find off-street parking during this time to free up more parking spaces for shoppers.

One place to park is in the city’s public parking lot located on Company Street, next to City Barber Shop. Other options include the city’s public lot next to Coaches Corner, space behind the Elmore County Museum and at the Elmore County Courthouse after hours and on weekends. Willis said the city is also evaluating various other options for more parking spaces downtown.

“Our goal will be to maintain access to businesses as much as possible during this process,” Barrett said.

During phase one, the sidewalk on the east side of Company Street will be removed and replaced. Barrett said this part of the sidewalk project is expected to be more complicated since the sidewalk is sloped on both sides and has various numbers of steps leading up to the businesses on that side of the street. Barrett said the sidewalk and steps have been there for about 100 years and it’s hard to say what problems crews may encounter once they get to work.

The plan is to raise the level of the road and sidewalks to eliminate the slopes. Lower and upper sidewalks connected by steps and a handicap ramp will be constructed on that side of the street, making it compliant with the Americans with Disabilities Act.

Although the sidewalks project is divided into phases, Fennell and Barrett said crews may be working on the areas interchangeably. He also said there may be times when work in one area is halted due to an unexpected problem. In that case, crews would transition to working in another area to avoid wasting time.

Fennell said the construction of the roundabout would be the most complicated and intrusive part of the whole project.

“This phase will be the most disruptive to traffic,” Fennell said. “We’re all going to have to be flexible through this.”

“During phase four – the construction of the roundabout – we intend to make Hill Street a two-way street to get traffic in and out of downtown,” Barrett said. “Company Street will become a two-way street as well.”

Barrett said making changes to the direction of traffic flow is something that will only happen during phase four.

Although the merchants are looking forward to the continued revitalization of downtown, some did express concerns about being given advanced notice for street closures and about delivery trucks being able to access their businesses during the construction phase and after the roundabout is complete.

“Good communication is going to be the key,” Fennell said. “There will be weekly updates from the contractor and we will have people on the ground to help businesses as needed, whether it’s to help facilitate deliveries for restaurants or any other needs.”

Fennell also explained that the roundabout will not have curbing. Instead, it will have a truck apron that will be leveled with the road and designed to give 18-wheelers more space to navigate the roundabout.

“This is going to take a lot of patience, but I’m excited about this,” Willis said. “We’re very proud of our downtown and what it looks like now, but we are excited about going into the next phase.”