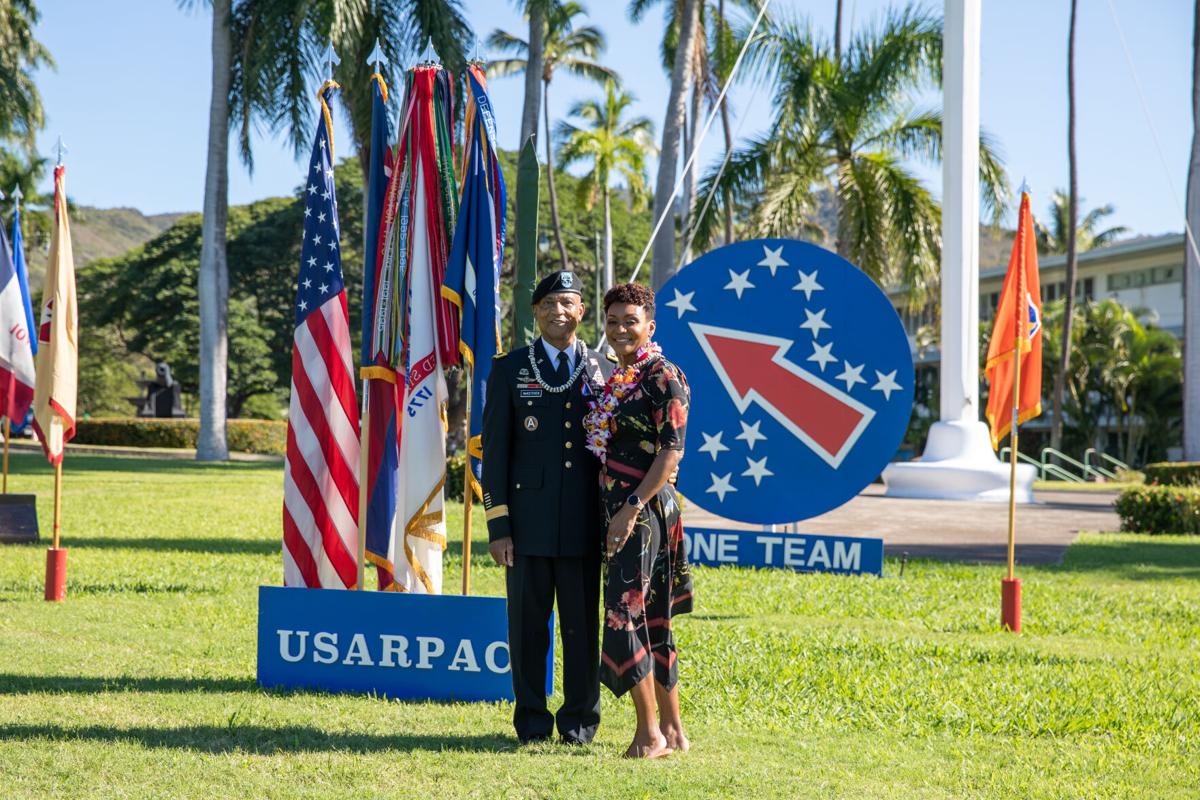 USARPAC Commanding General, Gen. Paul J. LaCamera, praised McKeithen for his more than 34 years of service to the U.S. Army.

McKeithen assumed duties as USARPAC’s Deputy Commanding General-National Guard from March 2018 to December 2020. He has been a general officer since April 1, 2011, and was promoted to major general in 2015.

“Thank you for your presence today as we pause for a moment to reflect on the distinguished career of Maj. Gen. McKeithen,” LaCamera said. “In honor of him and his family for their faithful service to our nation and we bid farewell as they close this chapter on their lives and open the next. Gen. McKeithen’s professional career is highlighted by achievements and success, though I think he would agree his greatest success is a bit more personal: his family.”

During the ceremony, McKeithen thanked leaders, peers, mentors, coaches, and counselors who help shape and stood with him as he went up the ranks.

“I just want to acknowledge the very few people that help me get to where I am today,” McKeithen said. “We deploy around the world away from our families, but that’s what we sign up for, to defend our country and I did that proudly.”

He credits his military success to his upbringing with his family in his hometown of Eclectic. He said that’s where he learned many of the values that are still with him today.

“I’ve been blessed for my military career and it goes back to my upbringing,” McKeithen said.

A valued memory during his high school years was when he played football at Elmore County High School. He noted that his football coach instilled those values of winning in him and taught him to always play clean and to have integrity.

He earned his bachelor’s degree in business from the University of Alabama in 1985 and his first master’s degree from the Florida Institute of Technology in 1994. In 2004, he earned a Master of Science degree in National Resource Strategy from the Industrial College of the Armed Forces in Washington, DC. He has completed senior executive courses at the National Defense University, the University of North Carolina’s Kenan-Flagler Business School, and the University of Virginia-Darden School of Business. His most recent military school was Army Strategic Leader Development Program – Advanced.

Prior to his current assignment, McKeithen served as Deputy Director of the Army National Guard, National Guard Bureau. In this position, he guided the formulation, development and implementation of all programs and policies affecting the Army National Guard, which has more than 350,000 citizen soldiers in all 50 states, three territories and the District of Columbia, and oversaw a budget in excess of $19 billion.

He was deployed to Saudi Arabia during Desert Storm/Shield and later served as the Reset Division Chief at the headquarters of the United States Army Material Command, and as Deputy to the Assistants to the Chairman, Joint Chief of Staff for National Guard and Reserve Matters at the Pentagon. McKeithen also served as Director of Logistics, J-4, and Headquarters North American Aerospace Defense Command.

He is married with two children. McKeithen is retiring from the Army to start a mentorship program for the younger generation, travel the world, run in countless of marathons and reconnect with family and friends.