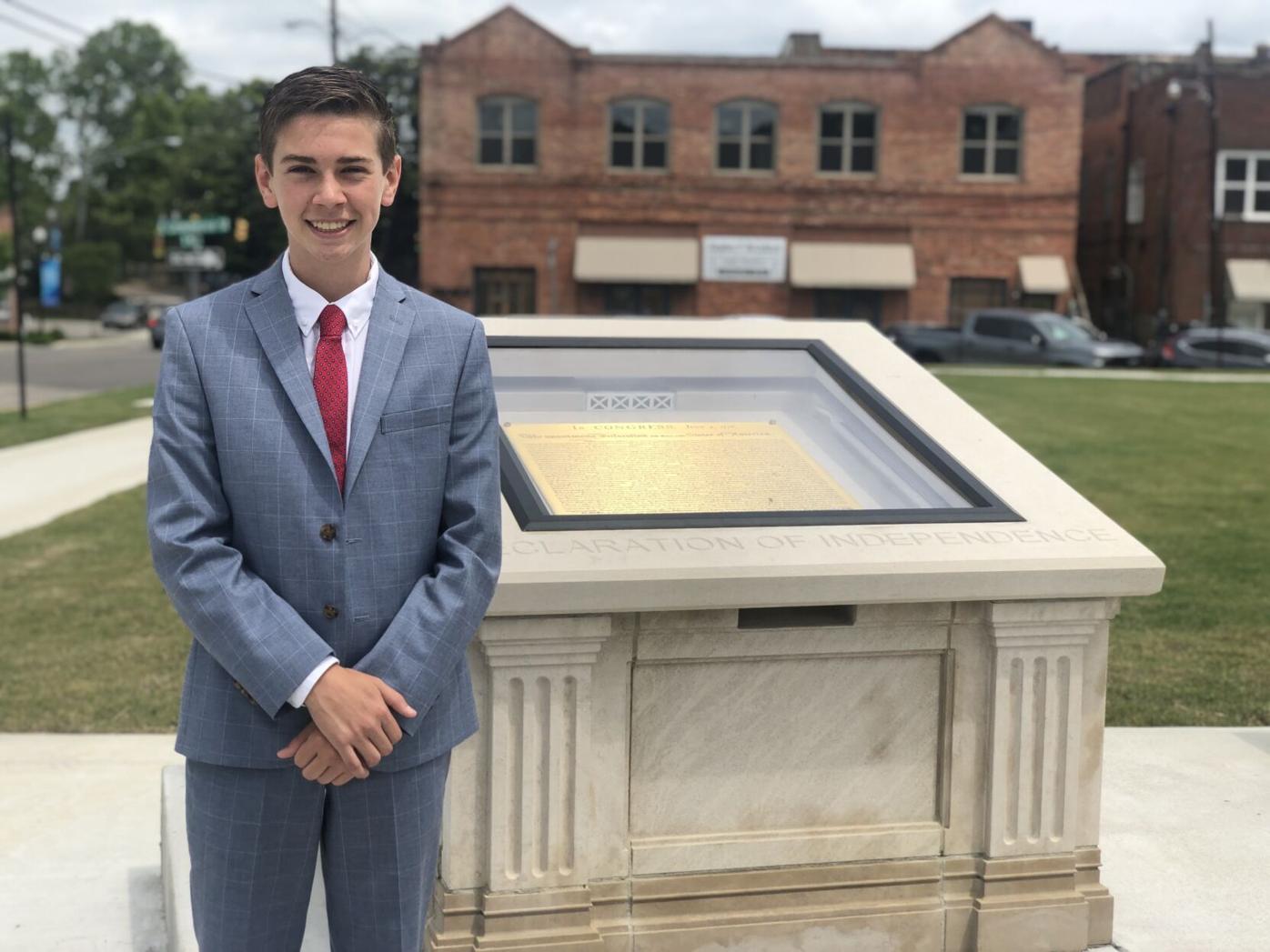 Rhett Pinkston stands at the Charters of Freedom. 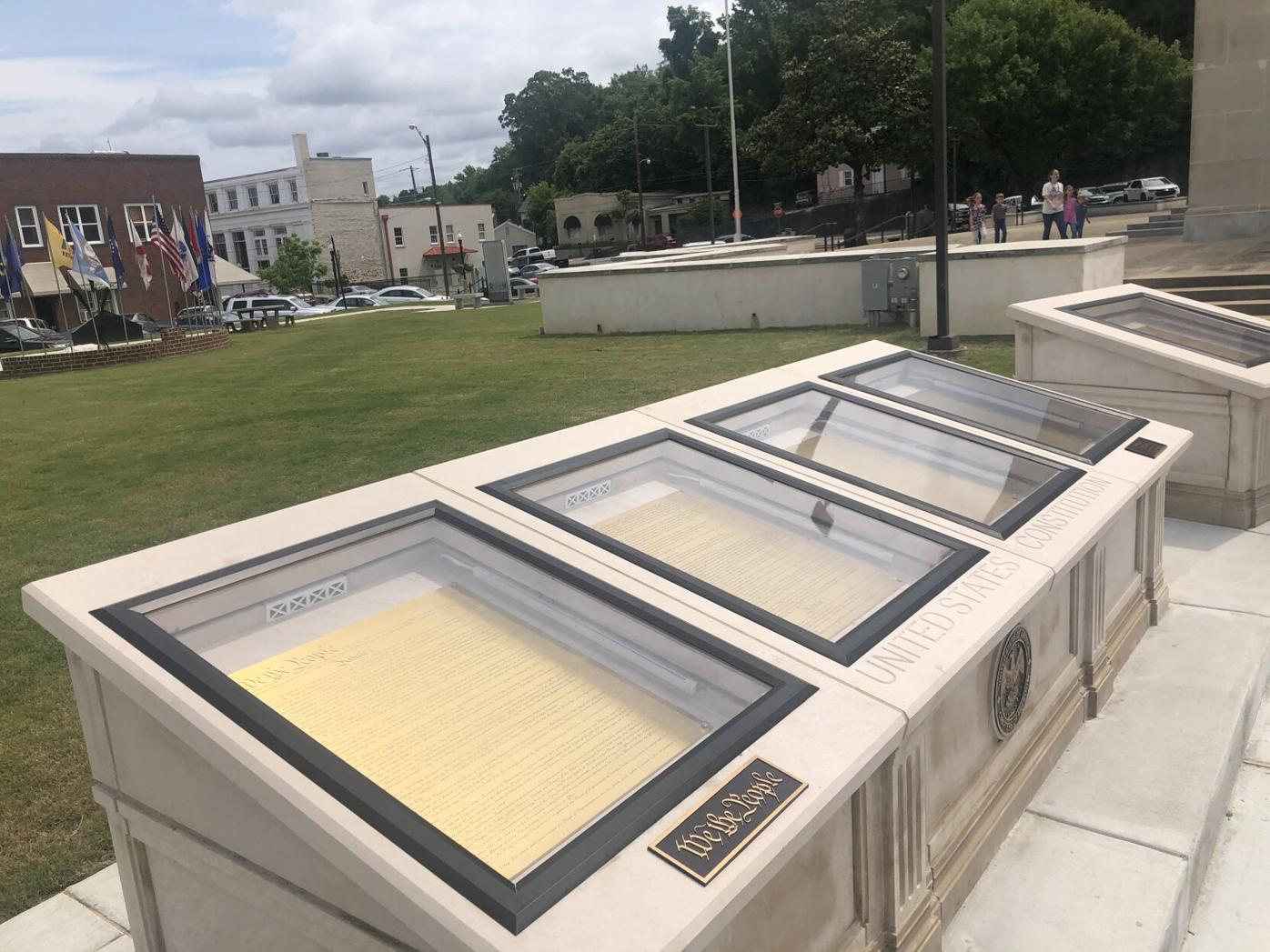 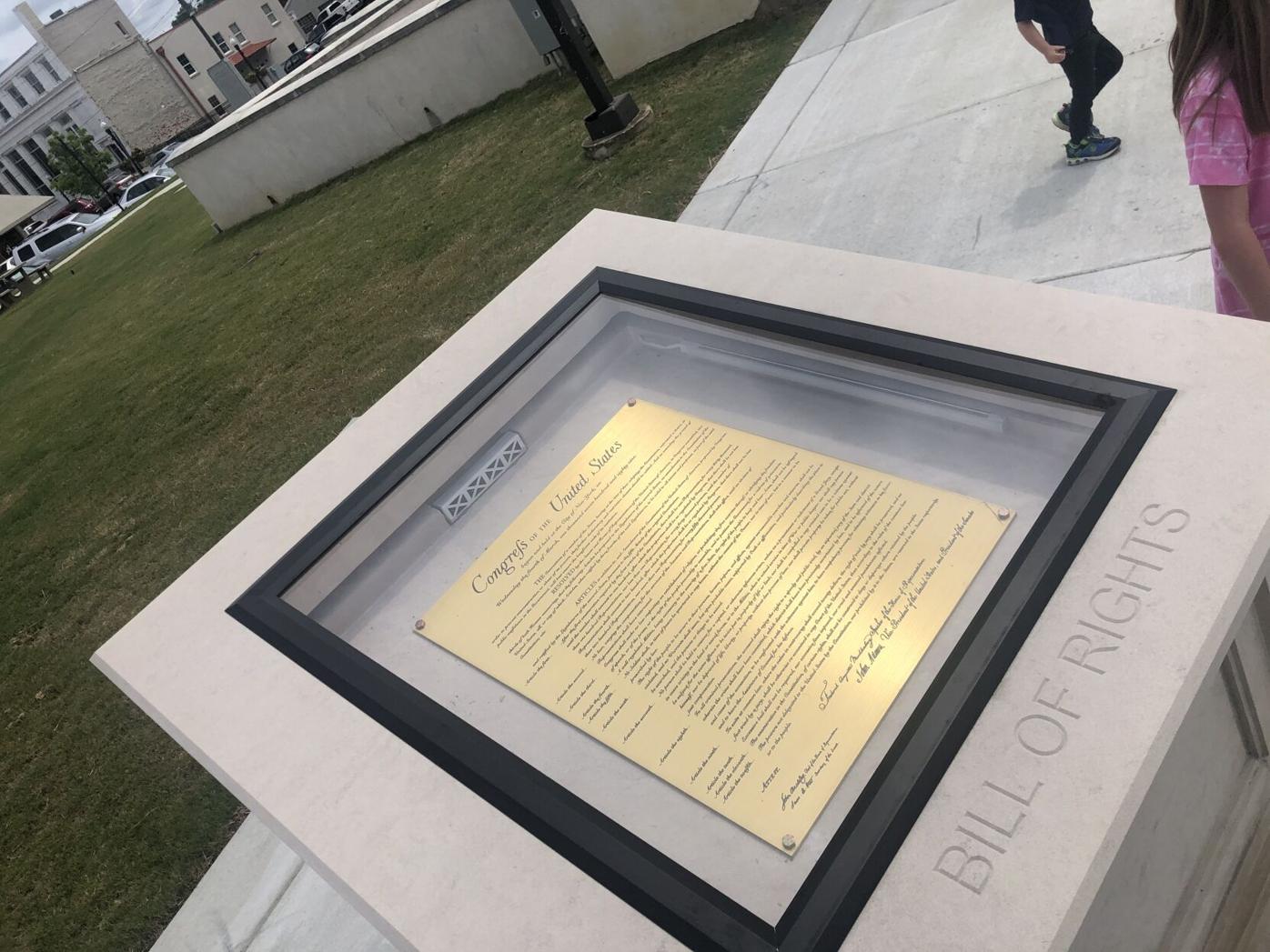 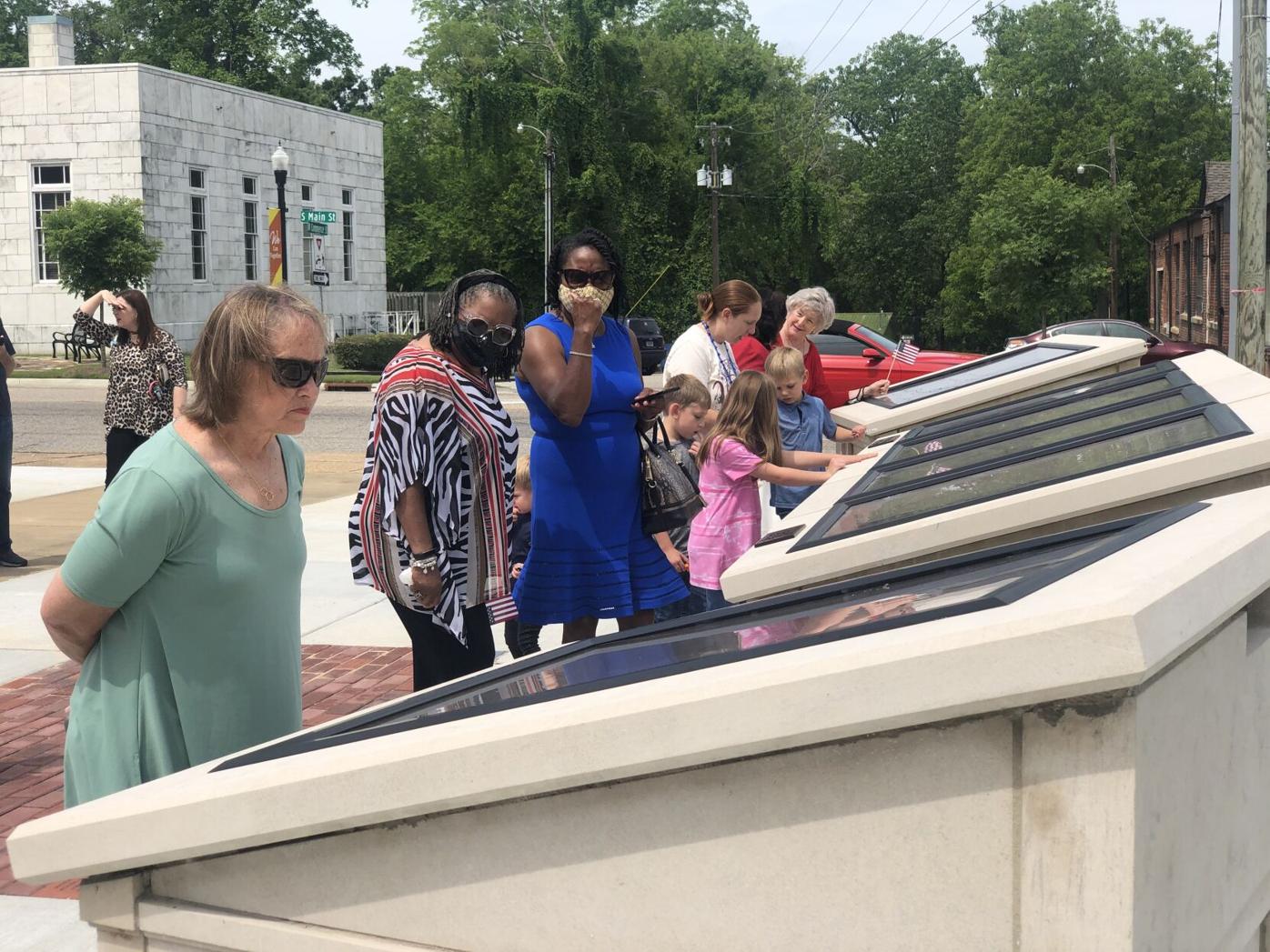 After the dedication ceremony, several people went to the courthouse to see the exhibit. 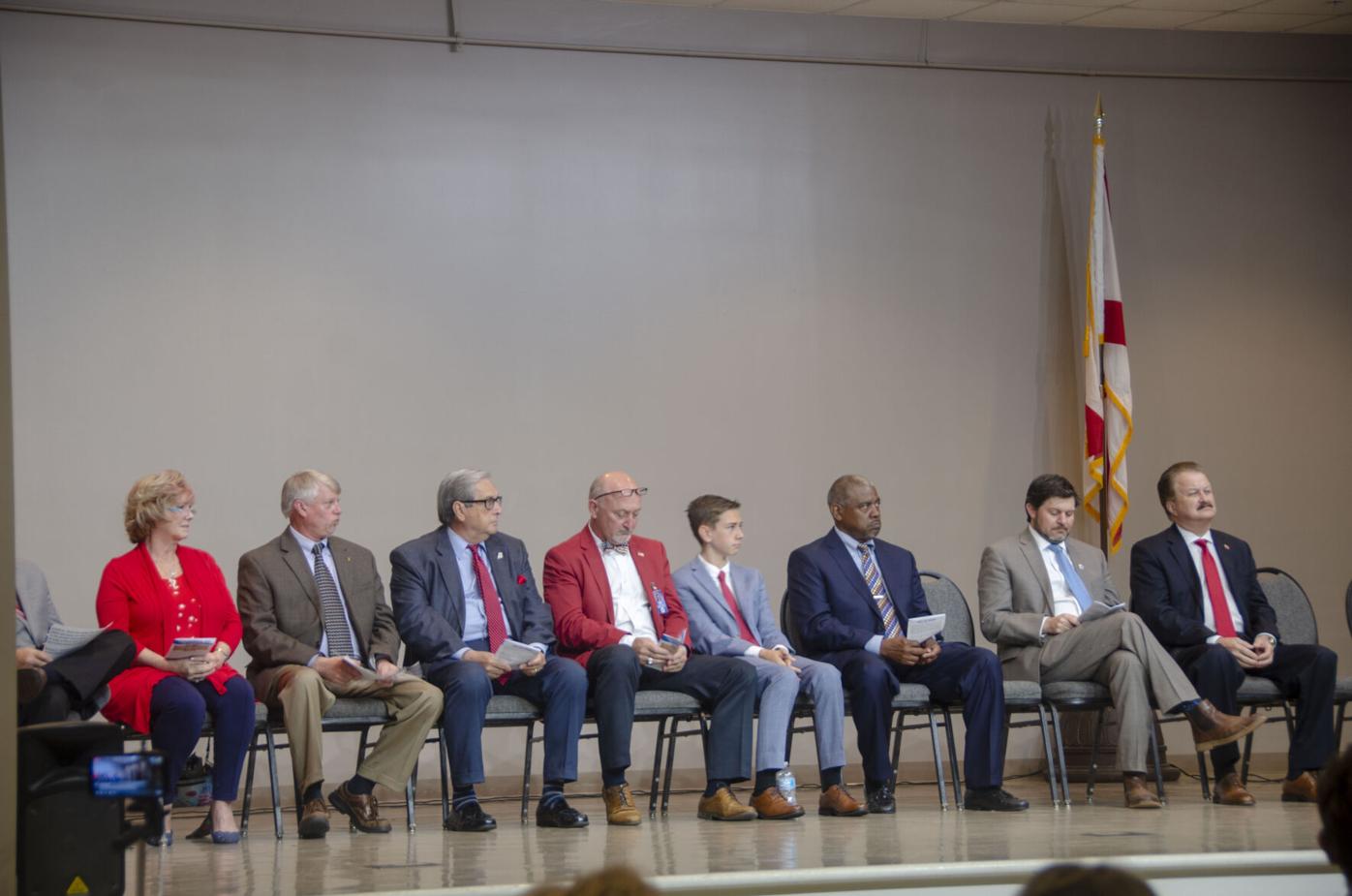 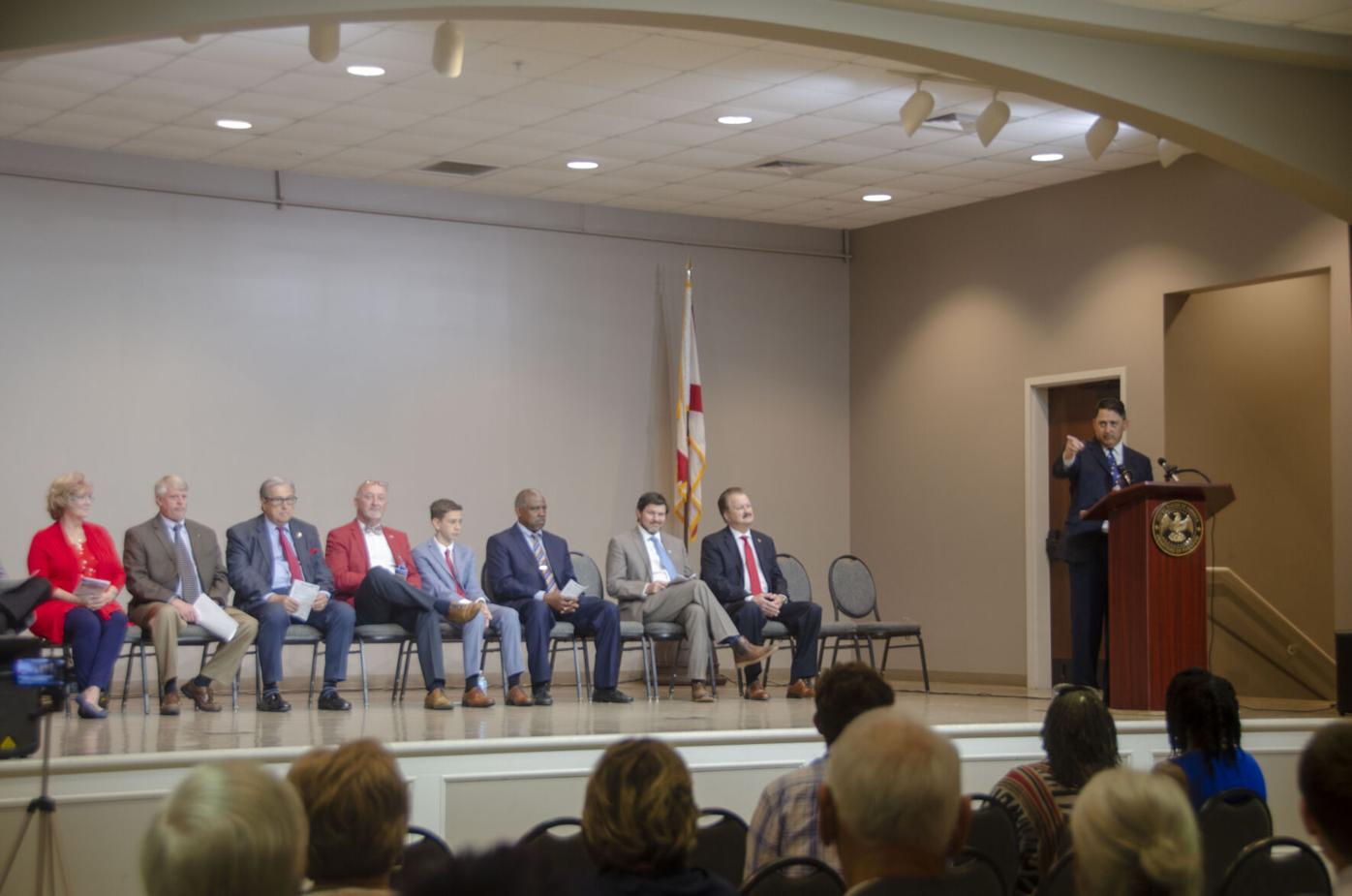 Mike Unruh addresses the audience at the dedication ceremony. 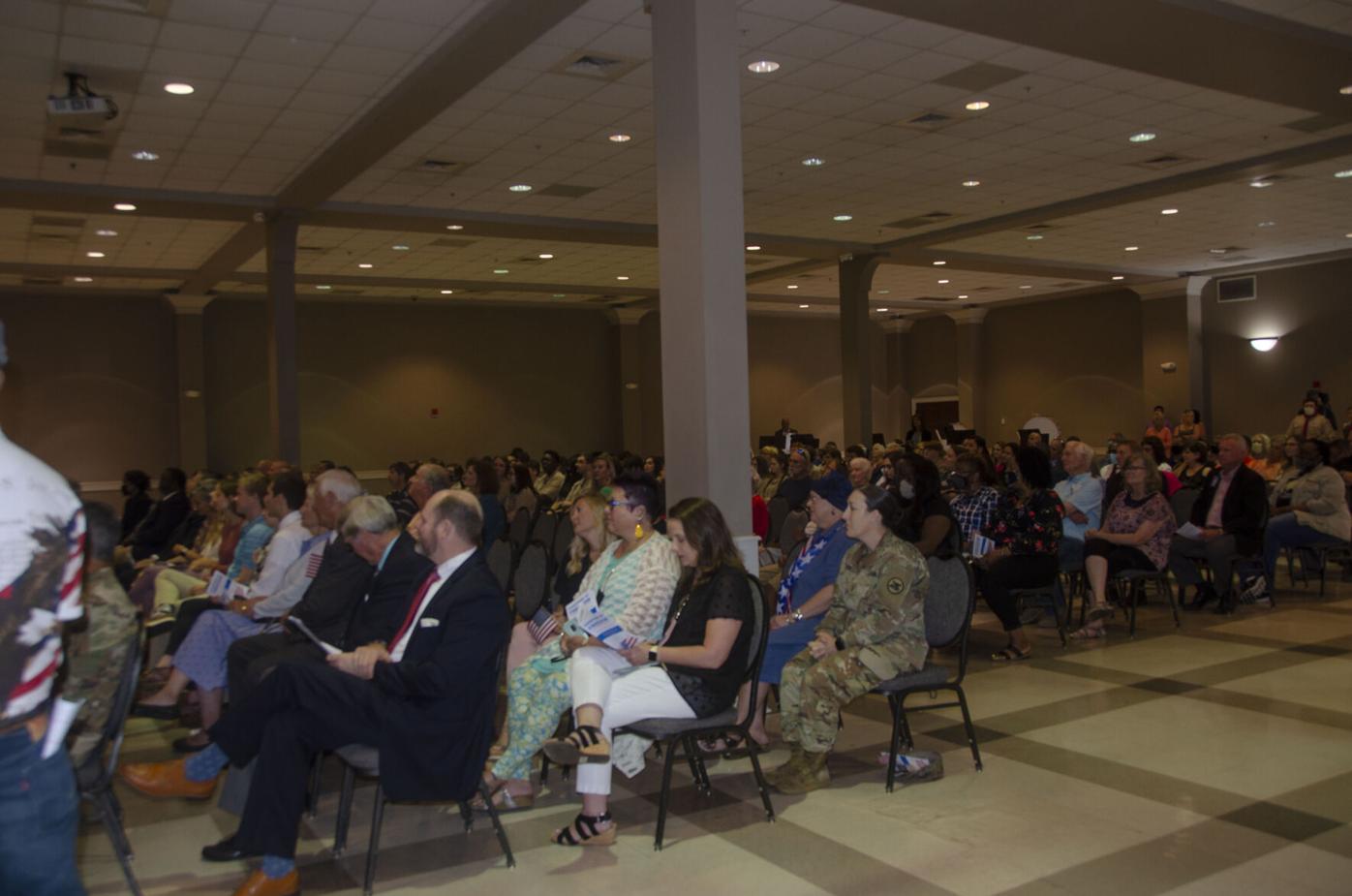 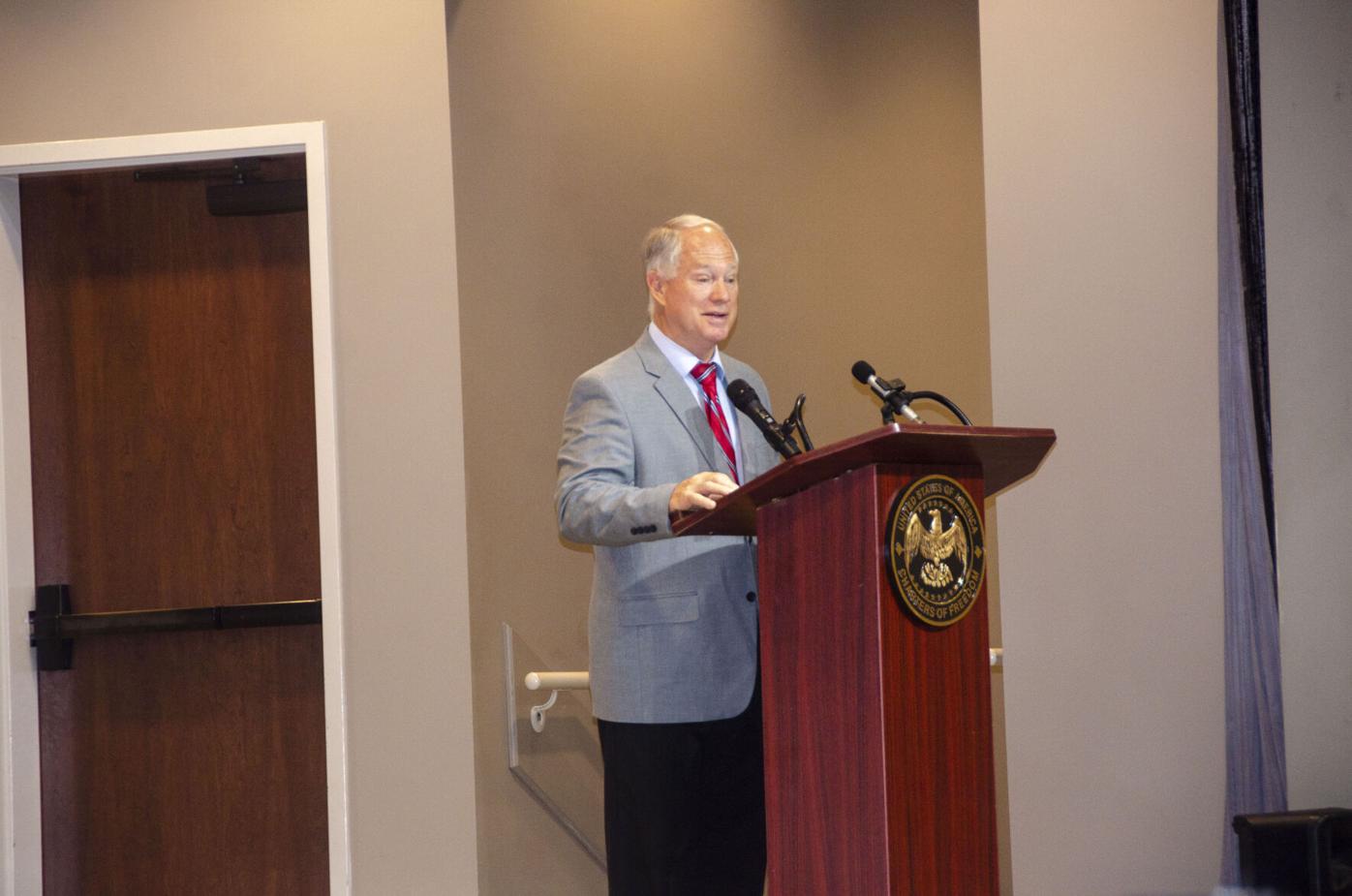 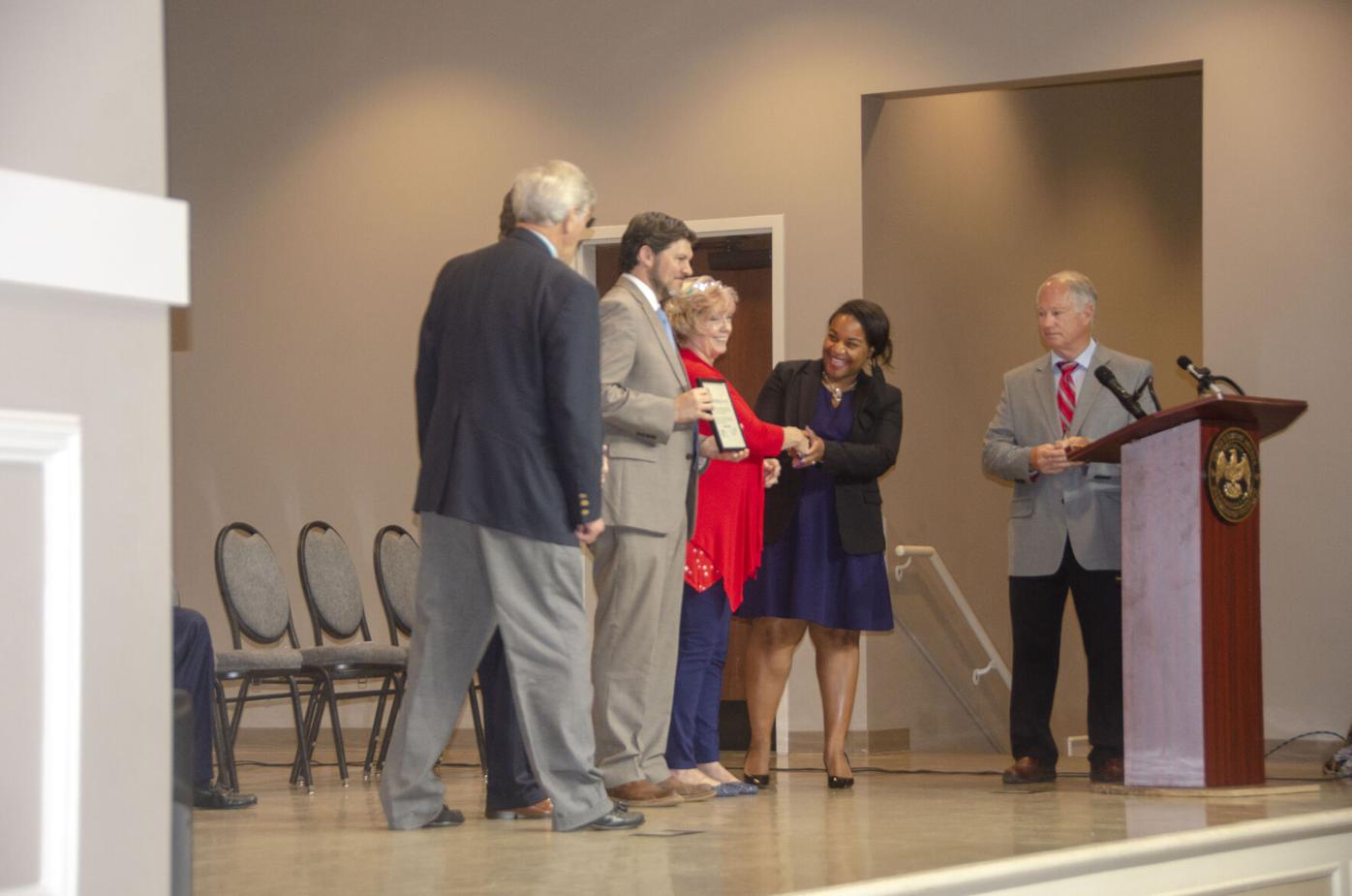 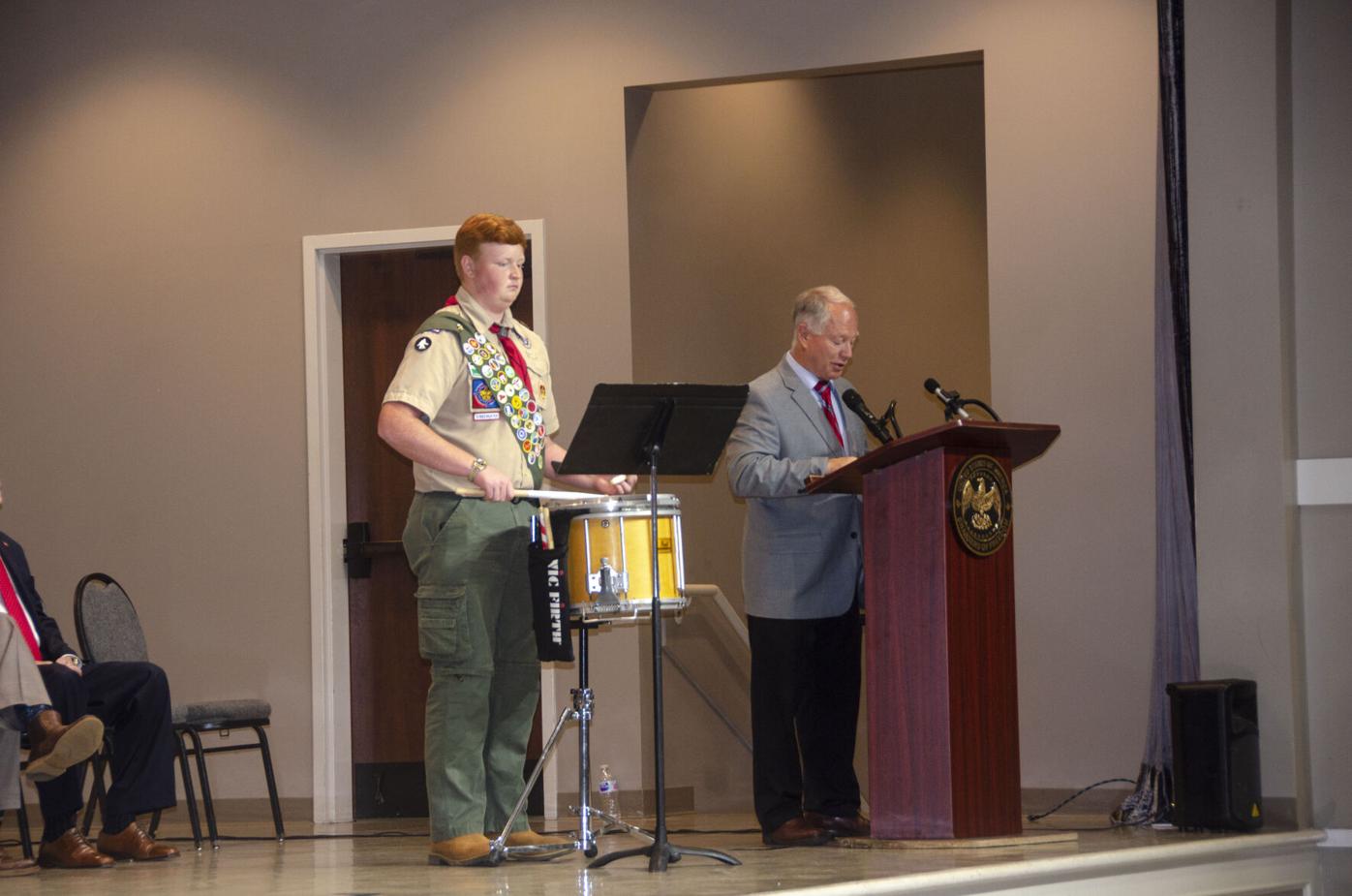 Rhett Pinkston stands at the Charters of Freedom.

Several members of the Wetumpka community gathered at the Wetumpka Civic Complex on Tuesday, May 11, for the Charters of Freedom Dedication Ceremony.

The Charters of Freedom exhibit sits outside of the Elmore County Courthouse and is the first constructed in the state of Alabama. The exhibit came to be thanks to the determination of local Eagle Scout Rhett Pinkston, the Elmore County Commission, Gardner Perdue, scoutmaster of Wetumpka’s Troop 50, and Foundation Forward, Inc., a nonprofit educational organization out of Valdese, North Carolina.

One day while researching subjects for his Eagle Scout service project, Pinkston came across the Foundation Forward and its Charters of Freedom exhibit, which is a replica of the nation’s founding documents that are displayed in the National Archives in Washington, D.C. Just like at the National Archives, the documents are displayed in chronological order with the Declaration of Independence (1776) on the left, four pages of the U.S. Constitution (1787) in the middle and the Bill of Rights (1789) on the right.

The exhibit is meant to serve as an educational tool for communities, to preserve the history of the United States and provide a way for people, who may otherwise never get the chance, to see and experience the nation’s founding documents. The cost for the project is 100 percent covered by donations.

With the idea that it would be great if a Charters of Freedom exhibit could be built in Elmore County, Pinkston sent an email to Mike Unruh, the foundation’s director of communications and resources, requesting an exhibit to be built. The Elmore County Commission later approved a resolution allowing the exhibit to be built on the courthouse property.

“I am so very glad that I replied to that email,” Unruh said. “It has been an honor and a privilege to get to know Rhett, his family and the people here in Elmore County.”

The process began in 2019, but was put on hold when COVID-19 hit. Now that it is constructed, Elmore County Schools Superintendent Richard Dennis said the Charters of Freedom will become a focal point for school field trips.

“It’s an impressive monument that showcases and reminds us of the drive and follow-through of our local Boy Scouts, Eagle Scouts and local government,” Dennis said.

Mayor Jerry Willis said the exhibit is a great addition to the city and the River Region as a whole.

“This plays hand-in-hand with what we’re doing in the city,” Willis said. “This is another attraction that people can visit and it’s such a great addition to our community.”

There is a vault in the back of the center setting where a time capsule will be placed. Several different Elmore County stakeholders will place letters, memorabilia and other items in the capsule, which will be sealed until Sept. 17, 2087 – the 300th anniversary of the U.S. Constitution. All of the time capsules in the Charters of Freedom exhibits throughout the nation will be opened on that same day. The completion of the Wetumpka exhibit marked the foundation’s 35th monument.

Also during the ceremony, Perdue recognized the families of 24 services members who died while serving in the military and who were directly connected to Elmore County.

“Today, we publicly thank you for their service,” Perdue said before reciting each name. A plaque bearing the name of each service member will be mounted next to the exhibit.

Before the close of the dedication ceremony, Troop 50 assisted with a seven-canon salute, representing the seven articles of the Constitution, and Vance Patterson, who founded the organization with his wife Mary Jo, issued a challenge to those in attendance.

“Here’s your challenge: You bring your son, your daughter, your niece, your nephew, other family members or neighbor down to your Charters of Freedom and you tell them about their freedoms and rights and how those freedoms and rights give them an advantage over the rest of the world to pursue their passions, to chase their dreams, to accomplish their goals and to get out of life what they want to get out of life,” Patterson said. “You do that, and as far as Mary Jo and I are concerned, we’ll call it even.”