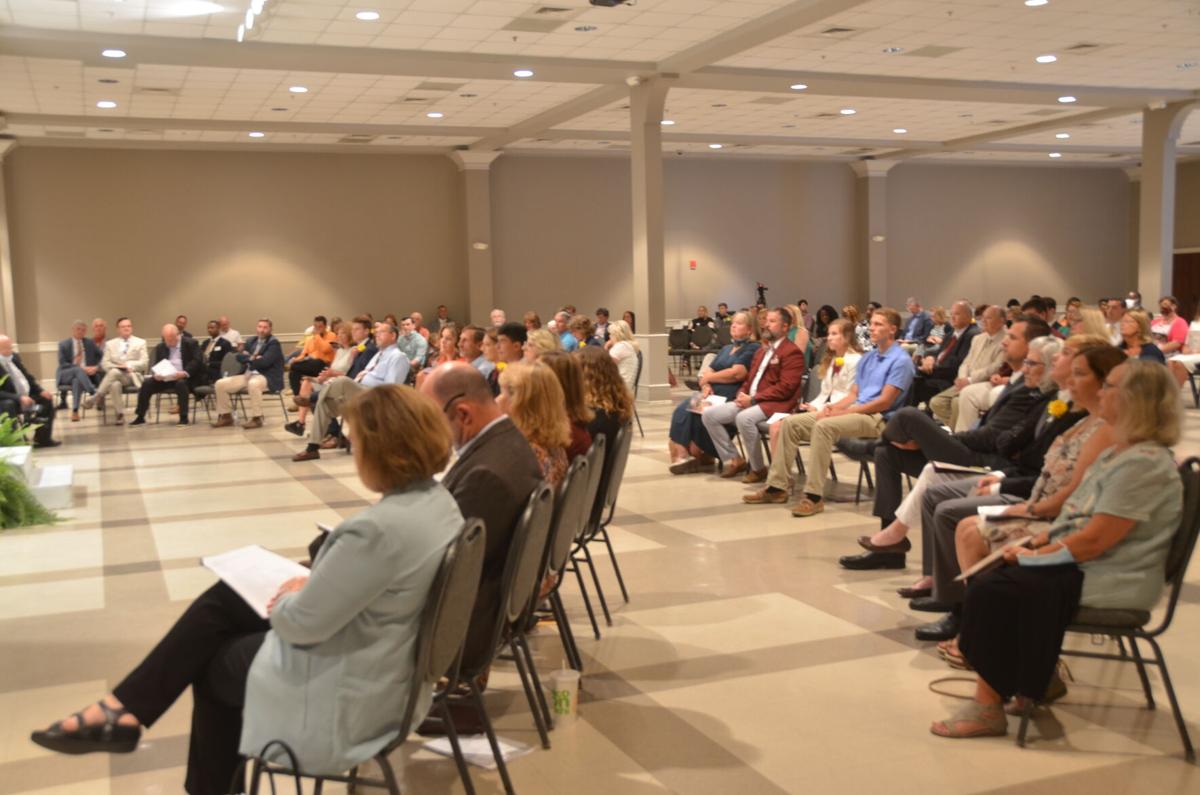 The crowd was limited at Tuesday night’s banquet due to COVID-19. 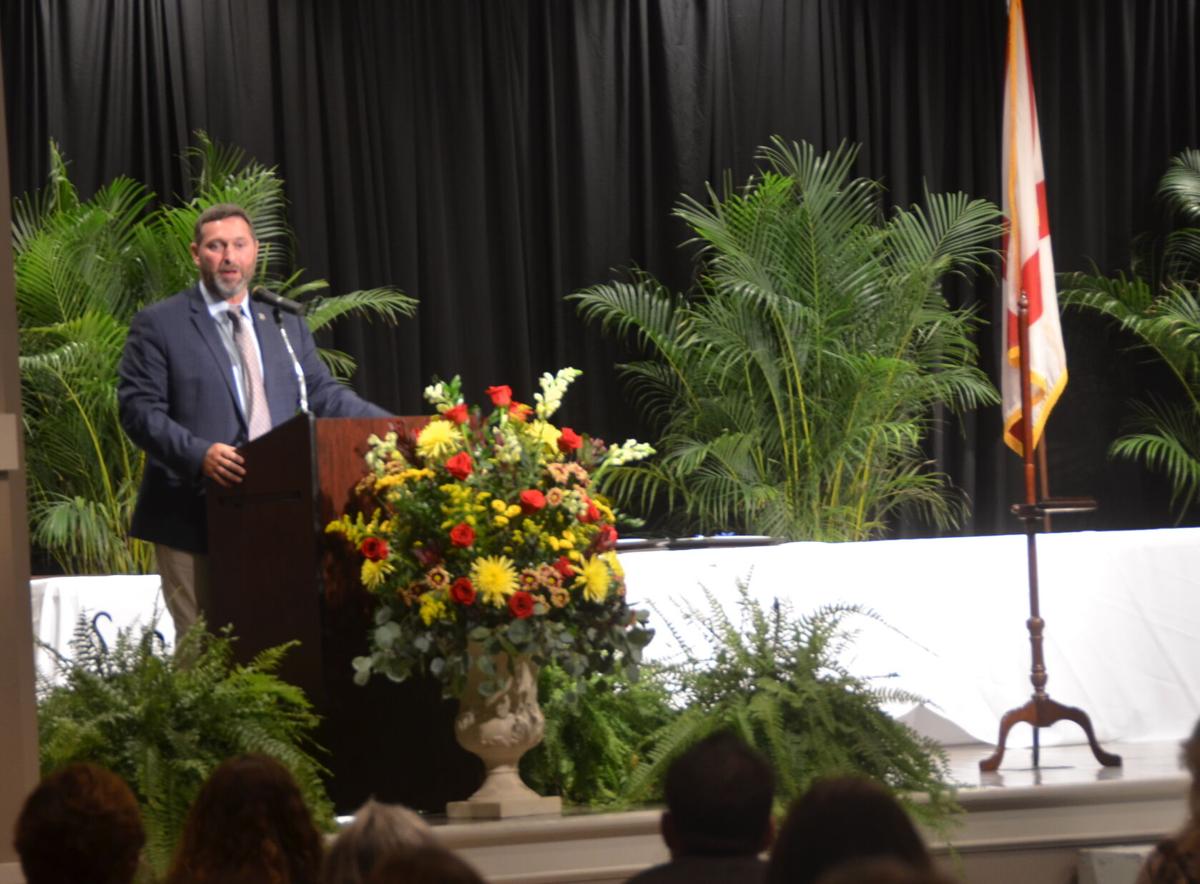 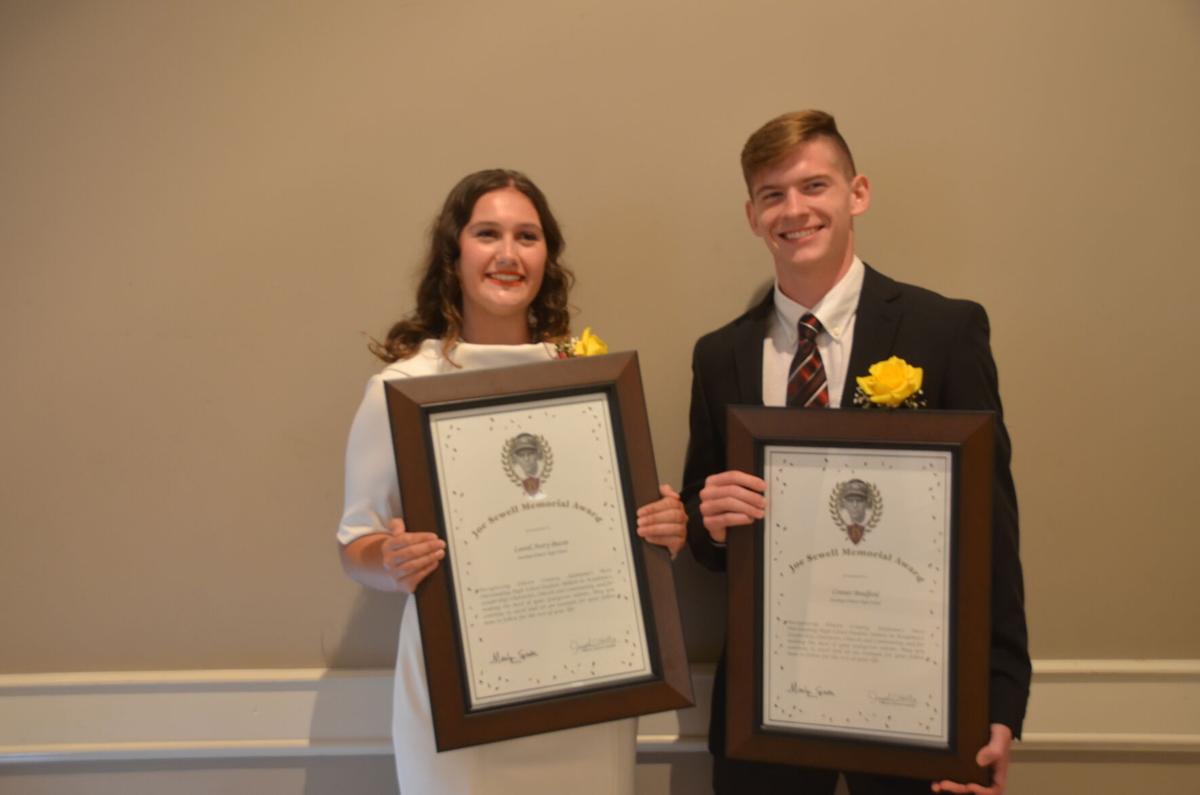 The crowd was limited at Tuesday night’s banquet due to COVID-19.

“Thank you to my parents, teachers and coaches,” Bacon said as she accepted her award. “Without their guidance, none of this would be possible.”

As she shared her favorite Bible verse that reads, “Return to your rest, my soul, for the Lord has been good to you,” she assured her peers “as you go on your journeys, the Lord will be prosperous to you.”

Bacon, who was a UCA All-American National Cheerleading Championship qualifier, will attend Auburn University in the fall majoring in pre-pharmacy.

“I’d first like to thank my Lord and savior Jesus Christ because He is the only reason I’m standing here today,” Bradford said as he took to the podium Tuesday night at the banquet. “Thank you to the Joe Sewell board for choosing me. Thank you to my parents for raising me right and to my girlfriend for helping me stay on the right path. Thank you to my coaches for your constant support.”

As he prepared to leave the stage, Bradford encouraged everyone in the room to “be the light for others.”

“In the midst of so much strife in the world, it’s our job as Christians to be the light for others,” he said.

Bradford, a high school football, track and field and basketball athlete, will attend Huntingdon College in the fall where he will play football.

The banquet for the 16th Joe Sewell Memorial Award Program was held Tuesday night at the Wetumpka Civic Center. The keynote speaker for the event was Auburn University head baseball coach Butch Thompson. The event was previously scheduled for the spring but, like many other things, was delayed due to the COVID-19 pandemic.

Established in 2005, the Joe Sewell Memorial Award recognizes high school senior athletes throughout the county who embody the highest ideals of Christian leadership. Each year, each participating high schools are invited to nominate up to four students for the award. From there, finalists are selected based on the criteria of excellence in athletics, academics, leadership, church and community involvement and character.

Ultimately, one male and one female is chosen for the top honor, which includes a $3,000 scholarship. Male and female winners are also selected in the categories of academics, athletics, leadership and church, community and character with each student receiving a $1,000 scholarship.

This year’s Joe Sewell Memorial Awards Banquet looked a little different than it has in years past. The Joe Sewell board members decided to forego the usual banquet meal and attendance was limited to the nominees and four guests per nominee. One administrative representative per school will be allowed to attend. Rather than being seated on stage as in the past, nominees sat with their family group of five, with groups socially distanced from each other. The event was also livestreamed via Facebook.

Outstanding ninth-grade Christian athletes are also recognized with award certificates each year and many eventually return as senior nominees. The ninth-grade certificate winners were recognized during a separate ceremony earlier Tuesday afternoon.

The Joe Sewell Memorial Award is the only program of its kind in the River Region that presents scholarship money in conjunction with awards. The award serves to honor the legacy of Joe Sewell, a native of the Titus community, who established a very successful baseball career in the Majors from 1920-1933 and was inducted into the National Baseball Hall of Fame in 1977.

Eight other finalists won category awards of $1,000 each. They were: